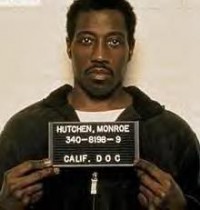 Hollywood actor Wesley Snipes has been released form federal prison where he was serving a three year sentence for tax related offences.

The Blade star reported to prison in December 2010 after a jury convicted him of willfully failing to file tax returns for 1999, 2000 and 2001. The 50 year old was reportedly released on the 2nd of April and will remain under house arrest until the 19th of July.

Snipes career deteriorated after the last Blade installment with many of the actor’s films being released straight to DVD. The tax case also cost him roles in Spike Lee’s 2008 war film Miracle at St. Anna and action hero ensemble The Expendables.

With Snipes rumoured to be starring in The Expendables 3, his comeback might not be too far away.