As an accompaniment to our recent review of Hitchcock it is worthwhile looking at the other Hitchcock biography of very recent times. Broadcast on the BBC on Boxing Day 2012, the girl is in a way a follow-up story to the Hitchcock film which takes you further down the rabbit hole into the myth that is The Master of Suspense.  Starring Toby Jones, The Girl is the story of the making of the two films made after Psycho, namely The Birds and Marnie. Based on the recollections of actress Tippi Hedren, it is a no holds barred account of her relationship with Hitchcock and how it deteriorated in a very short space of time. This is no gentle reminiscence but rather a quite frank and at times brutal retelling of the events. True or not it still makes for a compelling drama.

After the success of Psycho, Hitchcock turned his attention to a new project, The Birds. After failing to get Grace Kelly out of retirement after her marriage to Prince Rainier of Monaco he cast the relatively unknown actress Tippi Hedren in the lead role. With a background in modelling she had the look that Hitchcock wanted and everything else could be worked on. Eager to please the great man Tippi opens herself up to Hitchcock, allowing him to prepare her for the forthcoming starring role. As filming commences Tippi begins to feel more and more uncomfortable in Hitchcock’s company. He is lewd, intimidating and downright creepy. He makes sexual advances including a fumbled attempt at a kiss in his car. All are rebuffed by the increasingly alarmed Tippi. 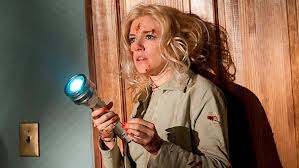 This proves to be a tipping point in their relationship with Hitchcock now acting cruelly and without any shred of humanity towards her. Tippi on her part soldiers on. Her lack of experience and confidence work against her. It all comes to a battle of wills enacted over the backdrop of the now infamous filming of the attic scene. Originally sold to Tippi with the promise that mechanical birds would be used only for this to ‘change’ at the last minute. The result was live birds being thrown in her direction for five days of filming. This turn of events changed the dynamic between the two. Having come out the other side Tippi had some measure of control and respect. A battle of wills followed.

This is a much darker piece than the Anthony Hopkins film. The characters are more extreme here. In the film Hitchcock we get glimpses of the darker side with the mood swings and the binge eating. In the girl the Hitchcock character is downright evil. There appears to be no light side at all. He has the demeanour of a predator and in a way comes across like one of the sociopath types he was so fond of in his films. 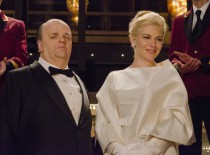 Toby Jones is immense in the role of Hitchcock. In his performance he has totally transformed himself into an utterly believable character. A top notch job indeed with many of the mannerisms we have come to associate with the public persona of Hitchcock. Sienna Miller is just as good as Tippi. At turns showing vulnerability, confusion and steely determination, the portrayal is deliberately under-played in a direct contrast to the overbearing presence of Hitchcock.

In essence this is a two hander with the leads dominating the screen time. Other actors including the fine Imelda Staunton as Alma Reville, have minor roles which are not really developed in any meaningful way. This is an oversight as Alma played more than just a supporting role in the life of Hitchcock. To have her role reduced is a disservice to her talents. This may not be the full story. The film is based on one viewpoint and it shows in that it is obvious where the sympathies lie. I am sure there are at least two sides to this story and it would have been interesting to see another viewpoint expressed.

Overall an interesting companion piece to the Hollywood version of the Hitchcock story. Dark and disturbing, yes, but an absorbing drama. Recommended.