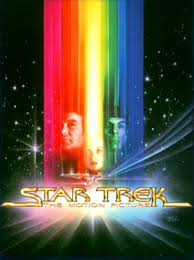 With the impending release of Star Trek Into Darkness, now would seem to be an opportune time to have look back at the previous films in the series. To date there have been eleven films in total covering the original crew, the next generation and the recent film reboot from the mind of JJ Abrams and Co. First up we go back to where it all started on the big screen for the franchise, Star Trek: The Motion Picture.

A mysterious gigantic entity has appeared at the edge of known space. As it enters Klingon territory, three K’t’inga class battle cruisers  are dispatched to deal with it. Employing their usual subtle approach of trying to destroy whatever is in their way the Klingons are in turn destroyed. As the entity progresses it appears to be on a direct heading for Earth. As it happens there is only one federation starship capable of intercepting the entity before it reaches its apparent destination. This is, of course, the Starship Enterprise. Currently going through a major refit in space dock, the ship is made ready and pressed into service. Now an Admiral, Kirk takes over command of the ship and sets off for a new adventure. Along the way several familiar faces are reintroduced to the viewers and proceed to take their places alongside the rest of the crew as the unknown menace approaches.

I must admit that I have totally changed my opinion of this film since I first viewed this in the cinema. At the time I was majorly disappointed by the film. It was nothing like the TV series so loved by me and countless others. So many things had changed and not for the better. I think at the time it was a bit of a shock to move from a fifty minute show to a movie that was two and a quarter hours. What I didn’t get a the time was the way the characters were being developed. All I could see was a lack of action. This put me off the film for a long, long time. 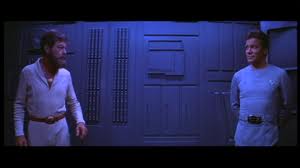 Looking at it again I can appreciate it a lot more. The characters are dealt with in a slightly different way from their appearances in the TV show. They are older and wiser. Sure Bones moans about the transporter and just about everything else. The difference here is that it down to self-preservation rather than having a go at the pointy eared bloke. Kirk’s character has the greatest shift in scope. At the end of the TV series he was still in charge of the Enterprise boldly going on to new frontiers. Now he has moved up to the rank of Admiral and hasn’t been aboard a ship in over two years. He feels like a fish out of water. He is torn between his ambition and his yearning to carry on doing what he loves. The character also comes across as a more humble and flawed. After taking command and nearly destroying the ship he learns a valuable lesson about his own abilities and the need to trust those around him.

The character of Spock is almost as conflicted as that of Kirk.  Probably the most complex of all the original characters due to his half human, half Vulcan status, Spock enjoyed the more in depth characterisation.   The film dips in to this from the very start with a scene where Spock is about to take the final step in the control of his emotions, only to be interrupted by the presence of the mysterious entity reaching out to him from space. The rest of the film is as much Spock’s journey as it is the rest of the Enterprise.

In a lot of ways I was impressed by the look of the film. It was a lot darker that the series it followed. The bridge of the Enterprise was much gloomier than before placing the emphasis on the characters rather than the flashing lights on the consoles and the beeps and whistles on the set. The set designs themselves were pretty good and have not dated as much as I would have expected. The score deserves a mention. Booming and imposingly dramatic at the right points. Quiet and melodic at other moments. A very nice touch was at the very start of the film where we get an overture played against a visual of space. A serene way to begin what is in effect an action film. 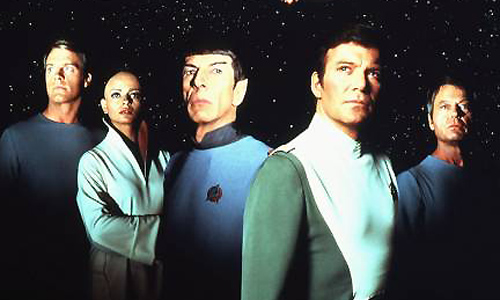 The story itself is interesting. Originally planned for the first episode of the aborted TV series Star Trek: Phase II, the script was expanded to movie length (and beyond) after the global success of the first Star Wars film. The story raises questions regarding life, home and a sense of belonging in both the main story line and the various sub plots involving the interactions of the main characters. It is a much subtler piece of writing that the TV show episodes in that it has more time to expand on its themes and reach its conclusion. A luxury not afforded very often to a network show of fixed running time.

There are flaws with the film. In some aspects it has not dated particularly well. The costume design is appalling with everyone in rather weird, ill-fitting jump suits that does not flatter any figure and actually accentuates some of the less defined bodies on show ( I’m looking at you Shatner!). Some of the visual and special effects are certainly dated. An argument could be raised that since this was made in 1979 there should be certain leniency in this department. Unfortunately this does hold as you only have to look at some other films made around that time to see what the effects could have been like. I’m thinking Star Wars and Close Encounters here. The sequences where the ship reaches warp speed look particularly bad. This film is one that could really benefit from an upgrade of  the effects sequences. Now that George Lucas is free maybe he would enjoy the opportunity.

The film is too long. Several scenes look to have been added just for the fanboys. When Kirk and Scotty first travel to the Enterprise they go right round it giving the viewer long loving shots of the sleek and shiny ship. Then when the ship sets out on from the space dock we are treated to another almost slow motion view of the entire ship. A bit unnecessary in my opinion as there are plenty of other moments to see the Enterprise in all its glory.

Overall a bit of a surprise for me. My previous opinion of this film has been reversed and I found myself enjoying it in a totally different way. Recommended.