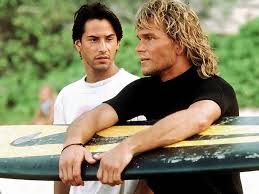 Worrying news has reached Moviescramble regarding one of our all time favorite films, Point Break. It has been announced that a director is now on board to helm the remake of the beloved surf and robbers movie. The man in charge is Ericson Core, previously best known for directing Mark Walhberg in the 2006 sports drama Invincible. In addition to his directing, Core has been director of photography on a number of high-profile films including The Fast and The Furious, Daredevil and Moviescramble favourite Payback .

A script has been in place for some time but it was only announced recently that the film had been given the green light with principal photography scheduled to begin before the end of 2013.  Why Warner Bros. feel it is necessary to remake what amounted to a classic of its time is beyond belief. There is a certain irony in the fact that without Point Break setting the template for extreme sports action films we would not have had The Fast and Furious franchise in the first place. Circle of life I suppose.

No word as yet on the principal cast but for what its worth Moviescramble would like to see Tom Cruise in the role of the aging surfer dude Bodhi. Opposite him as Johnny Utah the ideal casting would be Joseph Gordon- Levitt. Just for fun, as we love him, we would have Bruce Campbell as Pappas, Utah’s FBI partner.

Just in case you have forgotten how awesome the original was, here is the trailer.