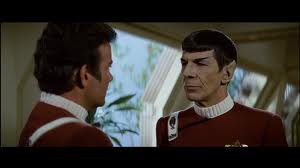 Three years after Star Trek : The Motion Picture  marked the release of the sequel, The Wrath of Khan. The first film was not deemed to be the commercial and critical success that Paramount Pictures had hoped for. On a budget of forty-six million dollars it took one hundred and thirty-nine million dollars worldwide, falling well short of expectations. Given its modest success (in Hollywood terms!) a sequel was approved with certain changes in place.

Primary among these was the removal of Gene Roddenberry from production duties. This was a major change as Roddenberry was the creator and show runner since Star Trek’s inception. With new faces in charge would the change be for the better or worse?

Some time has passed since the events of the first film. Kirk (William Shatner) is back at Starfleet command in the rank of Admiral. Spock (Leonard Nimoy) has been promoted to Captain of the Enterprise and is currently charged with training a new crew. Meanwhile across the Galaxy the Starship Reliant is searching for a suitably barren world for the Genesis project, a Terra forming experiment sponsored by Star Fleet. On one planet, Chekov (Walter Koenig) and Captain Terrell (Paul Winfield) come across a seemingly abandoned cargo hold that once belonged to the SS Botany Bay. It transpires this this is in fact the home to Khan (Ricardo Montalban) and his followers. Khan, a product of genetic experiments on intelligence in the late 20th century, and his crew were left on the planet by Kirk fifteen years previously. Khan had attempted to steal the Enterprise and kill the crew. At the time the Khan’s home was habitable but  due to an explosion destroying a nearby planet the terrain was devastated and unfit to sustain human life for long. Many of Khan’s crew died in the following years the and he swore vengeance on Kirk. With the arrival of the Starfleet officers his chance had come. Khan proceeds to take over the Reliant and heads off in search of the Genesis device and his revenge. 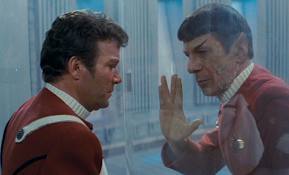 This is a far superior film to the first effort. Everything about it is tighter. It has an excellent story line that repeats and expands its themes from start to finish. It deals intelligently with the process of aging and the importance of friendships. Both of these themes are channeled through the character of Kirk. Once more earth bound he is growing old without much grace. In need of reading glasses and a change of scene after another birthday, the Enterprise is shown to represent everything that was young and vital about him.  There is a telling moment at the start of the film. A foreboding if you will. After the Kobayashi Maru simulation ends with all the crew ‘killed’, Kirk meets Spock and off handedly remarks ‘I thought you were dead’. Given the ending of the film this is a strong pointer regarding the direction of the story. Heady stuff for a Star Trek story.

Life and death are a feature throughout the film. The Genesis project’ itself a way to renew life through science’ becomes the focus of the battle between Khan and Kirk. A fight that is destined to be to the death. The training crew on the Enterprise represent new life and the changing face of Starfleet. The fate that befalls some of  them after the first encounter with Khan shows how fragile and fleeting life can be. We are also introduced to David (Merrit Butrick), the now adult son that Kirk gave up at the request of David’s mother Carol (Bibi Besch). Another reminder of how choices made in the past can affect the future. 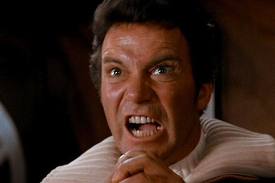 Part of the deal to approve a second film involved working under a tighter budget and reducing the running time. The film clocks in at a respectable one hundred and eight minutes. There is plenty of action scenes and some really interesting plot developments. There is no extraneous scenes on show at all. Instead of a long ponderous shot of the Enterprise in dock we get a thirty second scene which involves dialogue and plot as well as Kirk arriving on the ship. This cuts down on the running time and also the effects budget. The visual effects are also more impressive. Technology regarding special effects was moving on at a fair pace in the early eighties. This can be seen in the whole film especially the scenes in the nebula. The on screen effects (updated for the DVD release) look good and hold up well in comparison to the first film and some of its contemporaries. Gone are the multi-coloured warp scenes thank goodness!

Now this film is regarded as the first part of a loose trilogy alongside films three and four. In fact it has been marketed as such in at least one DVD and Blu Ray release. With hindsight you can see that was the intention as there is a story arc crosses over all three movies. It is an ambitious piece of film making and one that helped to cement the Star trek films as a viable and profitable franchise.

Overall a leap forward from the first film. The Wrath of Khan is the best possible representation of the Star Trek universe. Highly recommended.