I’ve always had a great admiration for the actor Lee Marvin. To me he appeared to be the consummate action star. I seem to have grown up watching his films on television. With the ability to play the bad guy in the likes of The Man who shot Liberty Valence and  The Killers, comically in Paint your wagon or as the hard man in The Dirty Dozen, Prime Cut and The Big Red One, Lee Marvin was always watchable never less than good. In the US debut film for director John Boorman, He is at his very best.

Lee Marvin plays the part of Walker. He is a mysterious character who carries out a heist with his old friend Mal Reese (John Vernon) and Walkers wife, Lynne. Walker is double crossed as Mal needs the money to pay off a debt to ‘The Organisation’, a network of criminals that appear to run the organised crime across the city. Walker, left for dead, is able to get away and slowly recuperate. Some time later Walker reappears and with the help of a shady man called Yost he starts to track down Mal and his wife. His goal is to get what is owed to him. Namely the sum of $93,000.

He first catches up with his wife. Mal, who was living with her , has moved on. His wife who is full of remorse takes her own life after admitting her mistake in going off with the wrong man. Walker then gains a new lead with the information that Mal is now a major player within The Organisation and is currently seeing Lynne’s sister, Chris (Angie Dickinson). The hunt is on for both the cash and revenge.

The success of this film is made on the twin points of the Lead performance from Lee Marvin and the Direction of the film from John Boorman. Marvin was never better than this role. It is a study in minimalist acting. The dialogue throughout the film is sparse. Most of the story is carried by the strong silent performance. More is shown in scene after scene using a glance, stare or blank look than could be conveyed in pages of script. Occasionally there are short exchanges that crackle with tension and wit adding to the overall feel of the film. 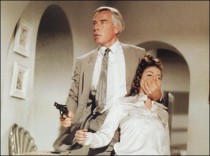 On several occasions instead of reacting in a standard way to a situation, Walker simply stands still and waits for his moment. There is a memorable scene where Chris is so frustrated with Walker. She starts to punch and slap him. Initially Walker defends himself but then just lets his hands fall and takes the hits without reacting physically or verbally. In allowing Chris to do this he is releasing the tension of the situation.

The direction, cinematography and editing are all top-notch lending a European art house feel to what would in other hands have been a run of the mill sixties crime thriller. Locations are chosen for their sense of space. San Francisco and LA are the back drops but the only landmarks we see are Alcatraz and a brief shot of the Hollywood sign. Alcatraz forms the backdrop for the initial heist and double cross. Walker after being shot is seen, almost in a dream like state, escaping from the Island by swimming away from The Rock. This is cut with him then visiting Alcatraz several years later where he is meeting with Yost.

It is left unclear as to how he got off the Island as the tourist commentary states that no one ever escaped the island due to the fierce waters surrounding the prison. There are many devices used by the filmmaker to keep the viewer interested including the use of flashbacks inter cut with the immediate action, slow motion shots and the use of different angles to try to give an alternative perspective to the scene.

Overall a very interesting piece of work in front of and behind the camera. Highly recommended.