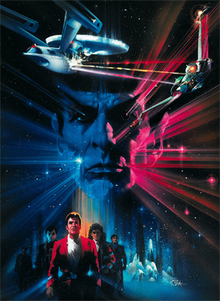 There is always a difficulty in following up a  successful film. The expectation level is raised and nothing less than a perfect film will satisfy the fanboys. So with the success of The Wrath of Khan the team behind the Star trek franchise had a job on their hands. In an unexpected move the directors chair was filled by none other that Leonard Nimoy. Not such a surprise when his CV is perused. Nimoy had, up to that point, been able to create an active alternative career in directing for both the stage and screen.  The directing job was made a little easier in this case as he would not be in screen for most of the movie. Why? Because Spock was dead.

The film kicks off exactly where the second one ended. Spock is dead and has been laid to rest on the Genesis planet. The Enterprise has returned to space dock for much needed repairs after the duel with Khan. Much to the crews surprise it is announced that the Enterprise is being decommissioned. Further to this shock, Doctor McCoy starts to show some erratic behavior.

At Star fleet Kirk meets with Ambassador Sarek and between them they figure out that Spock transferred his spirit to McCoy before he died. Sarek tells Kirk that his spirit and body should both be returned to Vulcan so that he may rest in peace. Meanwhile a Rogue Klingon commander has set his sights on gaining the technology behind the Genesis project for his own nefarious ends. Kirk, without a ship and only a handful of friends must try to find a way to reunite Spock’s mind and body while trying to outwit a most dangerous opponent. 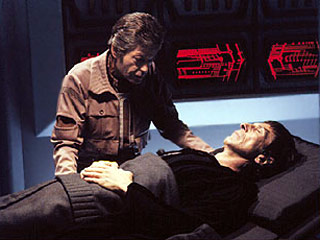 It was a good move  to set the third film directly after the events of the second one. That’s not to say that enjoying the film is dependent on seeing the previous movie. We get treated to a handy catch up of the final scenes of The Wrath of Khan at the start of the film. As with the other Star Trek films the main themes are still life, death and friendship. The cast list has been cut down considerably for this film and it allows the main characters to have a more developed storyline than previously. Kirk is still the main focus of attention but it was good to see McCoy playing a greater role in the proceedings. I always found his character to be under-utilised in the TV shows and it was good to see the good doctor in a far more sympathetic role.

Leonard Nimoy who is absent from the screen for the majority of the film handles the directing duties with apparent ease. He doesn’t display many stylistic touches which is to the advantage of the film. He allows the action time to develop and it is clear that he fully understood that the special effects would be  enough for the cinema audience without angular or swooping camera shots.

The film feels like it was well-developed during the writing and pre-production stages. There is little or no extraneous scenes or dialogue. Smart quips and raised Vulcan eyebrows are kept to an absolute minimum. Alas this would be the last time that could be said. That will no doubt be raised again in future reviews.

Essential to a good Star Trek film is an engaging bad guy. In an early film role, Christopher Lloyd as Krugge the Klingon warrior is the ideal opponent for Kirk and the crew. He is ruthless, hard and essentially for a bad guy, in my opinion, he is not prone to exposition. Normally we get an alien that cannot wait to tell Kirk how to overcome him. A refreshing change.

Overall a worthy entry into the Star Trek universe and a good stand alone film to boot. Recommended.