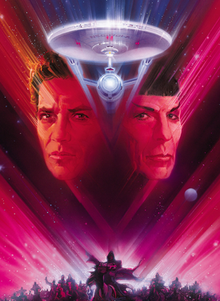 It is perhaps inevitable that the ego can get in the way of common sense. Especially when you are talking about a Billion dollar franchise like Star Trek. Off the back of the successful trilogy of films spanning numbers two, three and four it didn’t come as a great surprise to see William Shatner using his leading man status to turn the new Star Trek film into a vanity project. Taking over the director duties from Leonard Nimoy was only part of it . Shatner also penned the story the film was based on and, as usual, assumed the leading role. In hindsight this may not have been the best course of action for Paramount Pictures to agree to.

The new Starship Enterprise is on a shakedown run with only a handful of crew members on board. The majority of the command team are on shore leave while the repairs get underway. A message comes through of problems on the  planet of Nimbus III where a renegade Vulcan called Sybok has taken over command of the planet and is holding the Federation, Klingon and Romulan ambassadors hostage. The crew of Enterprise is assembled and the barely functioning ship is pressed into service on a rescue mission. Alas the mission is not a success and Sybok outwits Kirk and the team. His goal all along was to get a ship and travel to find the supreme being at the centre of the galaxy.

Unfortunately this is not a very good film. All of the main characters seem to have had personality and character shifts. All of them are made out to be almost comedy characters. The worst offender is Scotty. In the TV series and the early films he was the technical genius that provided the workable solutions to their problems. Here he is portrayed as a daft old man who at one point knocks himself out when he isn’t looking where he is going. Some of the others aren’t any better off. Spock and McCoy are underused to the point of being bystanders in the proceedings. Uhuru is actually embarrassing in her scenes. Some of the dialogue doesn’t help matters with a few choice cheesy moments dragging you out of the story.

Adding the character of Sybok as Spock’s half brother seemed like a bit of a desperate move. To introduce a character like that who had never been previously mentioned felt rushed and a bit too convenient for the story. It was almost like a soap opera story line where the returning sibling turns out to be the bad one. The Sybok character himself is a bit weak. He encourages people to face their pain through his Vulcan mind powers so that it can set them free. Everyone who does this decides to follow him in some sort of a trance like state. This is never adequately explained why they act like that. Bur wait! Kirk, Spock and McCoy are able to resist the power that Sybok possesses  They are made of stronger stuff.

For the smart guy that Sybok is supposed to be we see him making stupid mistakes all the time. He gets control of the Enterprise but forgets about Scotty. When Kirk escapes from the holding cell on the ship and tries to contact Starfleet Sybok doesn’t throw them back in a cell but leaves them free to wander the ship. At the end He ultimately cannot see through the God like creature that he seeks even though the being tells him what he actually is.

As I stated earlier this is a William Shatner vanity project. When Leonard Nimoy was in the directors chair he used it as an opportunity to step to the side as an actor and allow others to get a little more involved. That does not happen here. Shatner is front and centre for most of the film whether it is climbing a mountain or staging a rescue mission.

This film was a bit of a missed opportunity. With the previous successes it would have been interesting to see them taking a bit of a risk and maybe expanding the Star Trek universe a little. Mind you all the films can be said to be guilty of that. Other species outside of the main Human, Klingon and Romulans are only seen briefly and never feature in any meaningful way.

Overall a bit of a disappointing entry into the continuing franchise. I wanted to like it but it was poor at the time and has not aged well at all. Avoid.