Insurrection is the ninth film outing for the starship Enterprise and her crew. Following on from the critical success of the first ‘Next Generation’ film Star Trek: First Contact, once again Jonathan Frakes takes on the directing duties for a story penned by Star Trek stalwarts Michael Piller and Rick Berman.

This film finds Picard and company on a diplomatic mission to the lowly Evora whose application for Federation membership is being fast-tracked following heavy losses to both the Dominion and Borg wars. They soon get news that Data, who is assisting with a science mission observing the peaceful Ba’ku people, has apparently gone rogue and off they all trot to the ‘briar patch’ (a particularly nasty nebulous region of space) to find out what is going on.

Once there they discover that the Star Fleet personnel are working with the So’na to investigate the regenerative healing properties of the planet’s rings and all is not as it seems. Once Data is returned to the fold it is discovered that to harness the regenerative power the planet the process will make the planet uninhabitable and the plan to relocate the Ba’ku by stealth is thwarted by a now rebellious Picard and crew. Picard sets out to protect the Ba’ku from the So’na whilst Riker makes a break for it to let the rest of the Federation know what is really going on. Much fighting both on and off planet ensues and as always with the Star Trek films the heroes save the day. 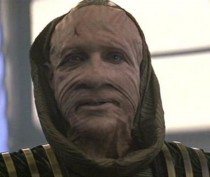 If my write up of the plot seems somewhat jaded then this is true, as at best the story arc is pretty standard fare and the whole thing doesn’t seem much more than an extended episode of the TV series. Similarly F. Murray Abraham as the borderline psychotic Ru’afo and Anthony Zerbe as the misguided Admiral Dougherty are very much treading water and hamming it up in good ‘Bad Guy’ tradition. 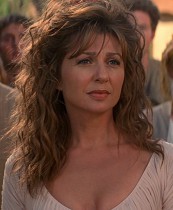 The majority of the Enterprise-E’s crew are just having a bit of a jolly and seem primarily there to provide some light comedic relief, whether it is Riker and Data comparing Riker’s freshly shaved chin to an android’s bottom, Troy and Crusher discussing how the regenerative field has made their boobs firmer or Worf’s return to puberty and accompanying bursts of ‘aggressive tendencies’.
Having said all that, at the core of this film we have Picard, played by the always fabulous Patrick Stewart, and apparently ageless Anij played by Donna Murphy, teaching each other about some of the more important things in life. Their scenes together are near perfect examples of how to play intellectual attraction on the screen and as a couple they are this film’s saving grace.

Overall there is plenty in this film for the fans, but for those uninitiated into the Next Generation crew’s adventures this film will not send them running to the DVD shop to pick up the rest of the collection. Get it here on www.amazon.co.uk