It feels like an age since I wrote the preview for Star Trek: Into Darkness and my excitement has been building steadily given just how much I enjoyed the 2009 reboot to the franchise. Once again J J Abrams takes the helm and I must applaud him for what is, once again, an incredibly good film. It is getting to the point that when I see the Bad Robot logo on the beginning of a movie I just sit back and grin. Star Trek’s writing duo of Roberto Orci and Alex Kurtzman are joined by Damon Lindelof, who worked with JJ on Lost, and between them they have created a cracker of a story that borrows from the existing Star Trek canon without seeming to be rehash of stories us Trekkers know well.

The film starts with the Enterprise and her crew observing the natives of the planet Nibiru and attempting to execute a plan that will stop them being wiped out by an unstable volcano. This plan is in violation of their mission, to observe and report only, and the aftermath results in a court-martial and Kirk being stripped of his command and made Admiral Pike’s first officer. Meanwhile an ex-Star Fleet officer John Harrison bombs a secret weapons development facility in London and then attacks a gathering of Star Fleet Command’s top brass, killing Pike.

Kirk is reinstated as captain and the crew pursue Harrison to the Klingon home-world of Kronos (Qo’noS) with instructions from Admiral Marcus to blow him to kingdom come with a payload of experimental missiles. Meanwhile Scottie is left behind having been relieved of duty after refusing to let the missiles on board the Enterprise.

I’ll stop summarising at this point as I don’t want to reveal any more spoilers, but subject to say that there is plenty of action and a couple of twists that show the trailer to be a beautiful piece of crafted misdirection! The film also has plenty of nerdy references for the initiated that I have no intention of spoiling.

The lead duo of Chris Pine and Zachary Quinto continue to build on the strengths of their character interactions from the first film and we slowly see the levels of mutual respect and trust grow between Kirk and Spock. Both are excellent. 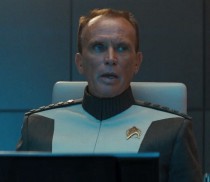 I have to say that Chris Pine is really growing on me. After some of the disasters he has appeared in I am pleased he is clearly enjoying his leap into geekdom, as he is going to be attending conferences for the rest of his life!

Simon Pegg as Scottie doesn’t get anywhere enough screen time and like the rest of the returning crew (John Cho, Bruce Greenwood, Zoe Saldana, Karl Urban and Anton Yelchin) is pretty much there for light relief. I have to say that Pegg’s Scottish accent is becoming more and more comical and he is certainly playing the role with his tongue wedged in his cheek. 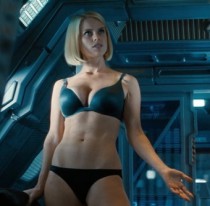 That brings me to the new-comers. First we have Peter Weller (Robocop) as the warmongering Admiral Marcus and Alice ‘Let me prance about in my undies’ Eve as his scientist/engineer daughter Carol. (Yes, that’s right Dr Carol Marcus… Nerdgasm!) Weller follows in the footsteps of many great Star Trek ham actors and whilst he isn’t up to Christopher Plummer or Ricardo Montalban’s level of fromage he certainly shows that he is made for a slightly less serious level of movie role!

Eve is passable but her character feels a little short of development and is mainly there as fluff. Admittedly it is very ‘well developed’ fluff, and deserves an image somewhere over to the right! (Thanks Ed)

Finally we have Benedict Cumberbatch (Sherlock) as the rogue John Harrison who is absolutely mesmerising. In the same way he is 100% believable as the genius Sherlock, here he falls into the role of the near super-human Harrison with ease and brings a level of understated intimidation to the screen that I haven’t seen in a long time. Bravo!

In addition to all the above the film is absolutely beautiful to watch and rather pleasing on the ear too… With one serious problem… The 3D is awful. I am not a big fan of 3D in the first place and done badly it distracts from a really good movie. Anyway I haven’t watched as bad a post-conversion to 3D since Harry Potter 7 pt 2. The conversion produces some serious focussing issues and if you are looking at the wrong spot you will find yourself fast developing a headache. Personally I had ridiculous levels of eye-strain after the film and I cannot stress more seriously that you should boycott the 3D and go see this in 2D.

3D issues aside this is still an absolutely stunning film with plenty for the first timer and a whole pile of nerdgasms for audience members like myself. Roll on Star Trek 3 and Star Wars 7!

One thought on “Star Trek: Into Darkness”