Imagine living with someone and never seeing them? Despite this, you are still able to hold “conversations” with your phantom roomate even to the point you strike up a romance with them. It’s an interesting concept which sets the scene for John McPhail’s romantic comedy Notes. 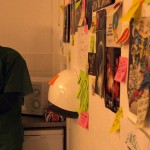 “I had a flatmate that I never met for three months,” explains John on the source of his inspiration. “We used to leave each other post-it notes around the flat to communicate with each other. I thought there was something to this scenario and wondered what this would be like if I put a boy and a girl in this situation and watch their relationship develop.”

Having worked within the industry on indie projects such as the TV pilot The Crews and also shooting and writing with the Endemic Comedy group, John felt he had learned enough to try and direct his own project. He approached Andrew Lanni who he knew from his days at the Royal Academy of Music and Arts where they both studied Digital Film and Television Production. Andrew, who had gained valuable experience working in production for the BBC and STV, was only too happy to join the project as the producer. “We had been given a two week break”, he says, “and decided it was the perfect opportunity to shoot the film as a lot of the prep and rehearsals had already been done.”

Although short films can be made for next to nothing these days, they can also easily cost thousands of pounds to produce. Was money an issue with Notes?

John:“You don’t have to spend a lot of money to make a nice short film. We utilised our locations and we used our previous networking skills to obtain pretty much everything in a beg/borrow/steal type action!” 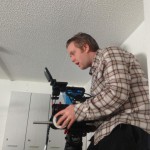 Andrew: When I first read the script I knew that budget wasn’t going to be a big issue but there is always that question of where the money is going to come from. John had given me a £300 budget, which we had managed to come well under, somewhere under the £150 mark.”

John: “I would like to mention that my grandfather had passed away a couple of weeks previous and had left me a little bit of cash. Instead of spending it on a holiday or a drinking sesh, I decided to put it towards my films.”

Andrew: “We shot the film over a two day shoot, were all of the crew had the time of from work. The crew consisted of a small, tight unit that we both knew would be able to get on with each other and also work effectively under the two day shoot schedule.”

With Notes due to screen at film festivals over the summer, including the Loch Ness Film Festival and the Edinburgh Short Film Festival, what’s next for you both?

John: “I wrote and drafted six short films in four weeks. These films and genres would tie into our feature film that we are developing for next year.” 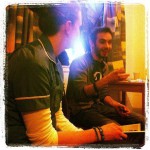 Andrew: “The idea behind the shorts is to give us a bit of guidance and experience before shooting the feature, with each short film stepping up the game each time in terms of production value, crew experience and acting ability each time. It is also giving us time to create an almost ‘family’ like crew.”

You can find out more information regarding the film on the official Facebook page.

Notes stars Tyler Collins and EmmaClaire Brightlyn and will reviewed by Moviescramble in the near future.