It can become disheartening for the budding film maker in today’s blockbuster climate. To know of a vast creative and artistic talent pool around you as you make films only to see the mindless drivel that is pushed at the public in the form of movie entertainment on a weekly basis. It is no wonder that some film makers decide to go to the opposite extreme to the formulaic redundant sequels on offer. One such person is Andrew MacKenzie and his reply to the multiplex culture is presented in the form of his first feature, Dimention Zero.

We open in a dark and gloomy multi storey car park. A shabby figure comes into view and unexpectedly begins to dance. Cut to a man waking from a dream with a start. The Man, M, Then goes about his routine of getting ready to leave. The outside world is oppressive and dark as M travels to his destination, A room where with the cue of a light coming on prompts M to perform the task of cooking eggs on a portable stove. The task is accomplished with care and attention to detail. M tests the flame possibly to see if it is real. The pain seems real enough. M wakes with a start and the process begins again only this time it is more fragmented. All of the time an electronic soundtrack is ramping up the intensity of the task. Repetition and frustration pervade the screen.

Again M awakes after several fragmented images. These inform his next task. He is following a girl, F (Lauren Lamarr). As he walks her actions and movements are mirrored by M to the extent that they could be one person. His pursuit intensifies with F always one step ahead of him. She leads him deeper and deeper in the broken and barren city. His carelessness exposes him to a beating at the hands of a gang of girls. Rather than dissuading him the beating seems to propel him onwards in his quest. 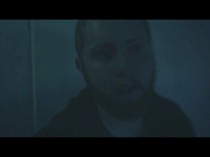 This is a film that sets its stall out from the very beginning. Eschewing normal film conventions, Dimention Zero has been made under the Pink 8 manifesto. The manifesto is along the same lines as Dogma 95 in that it follows a strict set of rules including the use of natural lighting only, mostly improvised, No effects or prepared script, no budget and mistakes are encouraged.

For a start the film looks dreadful. The film was shot, edited and displayed on a screen where it was shot again. The result is a film that is out of focus and in turns grainy, washed out , and then colour saturated. Exactly what the film maker was looking for. There is less of a feeling of unease if you are faced with pristine 1080p images. The look lends itself to the overall feel of the piece. The film is assembled in such a way as to never give the viewer any comfort or assurance of what is about to unfold. The film has no distinct style which is apparent by the number of different people who manned the camera. As well as the Director / Actor a number of trained and untrained cameramen were utilised when the director was in shot himself.

There is a theme of a never ending nightmare running through the film. You are never sure if M is awake or slipping further into his dreams. The recurring images, fragmentation of  time and tension all reinforce this. As the film goes on we are introduced to a series of pieces regarding issues such as community, death, nationality, security, and society. rather than placing himself in the frame thus changing the outcome, Andrew points the camera and lets the subjects vent. Some have something to say even if they contradict themselves in the course of a single sentence. Others are just giving voice to their frustrations at a world that makes little or no sense. In line with the surrealist elements of the dreamscape the commentaries are fractured and sometimes incoherent.

It is telling that the last section of the film is entitled awakenings. In order to come out of the false world M must separate himself from the nightmare. How he does this is personally cruel but necessary to aid his passage.

Not an easy watch in any way but Dimention Zero gives plenty for you to think about and some images that linger long after the beats have stopped.