Heads up. Spoilers bide within. 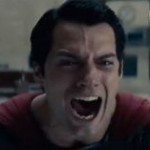 Having been one of the most anticipated films of the year, it was natural that Man of Steel would become the subject of much discussion and derision. Devoid almost entirely of humour, Zack Snyder’s take on Superman was a much more serious and darker affair than cinema goers were accustomed to. The wanton destruction that is caused in the film, without so much as an afterthought from the last son of Krypton, was too much for many to bear as they likened Man of Steel to disaster porn outings such as Transformers 3. Worse for some people was Superman’s decision to snap Zod’s neck like a twig (warned you there were spoilers),  a move many felt was out of character for the alien boy scout. But was it?

Let’s go back to Superman II when Kal-El and Zod had their last big screen battle. After being released from the Phantom Zone Zod, Ursa and Non quickly discover that being in proximity of Earth’s yellow sun gives them powers. Powers which any sociopatheic monster is soon likely to abuse.

Zod goes on to conquer Earth as the President of the United States kneels before him. Who exactly gave POTUS the go ahead to be in charge of the entire world is neither here nor there, this is Hollywood dammit. Zod then learns of Superman and, thanks to Lex Luthor, his true Kryptonian origins. Since Zod can’t kill Jor-El, what better way to get revenge than target his son? Not long into the battle it’s clear that Superman cares very much for us humans, a weakness which is soon exploited by the villainous trio in one of the most poignant scenes in cinematic history. .

Much to the dismay of the people, Superman eventually runs away. Not that he’s turned chicken, he has a plan. Luring Zod and co to the Fortress of Solitude he strips them of their powers rendering them human. Remember, not

only do his enemies share his powers they are also trained military terrorists whereas Superman is not . The next part of his plan would naturally involve Superman turning over the bad guys to the authorities in the name of truth, justice and the American way. Not quite. Having turned them human, Superman crushes Zod’s hand, picks him up high above his head in a mocking manner and then throws him to his icy death. Oh, and did I mention he’s pleased with himself?

Let’s compare that to Man of Steel. Having Zod in a choke hold, Zod forces Superman into a choice. Kill him and betray his beliefs or watch an innocent family be incinerated… to death. Naturally being the big softie that he is, Superman kills Zod and guess what? He doesn’t look to happy about it. No, instead he’s filled with agony at having murdered someone. Plus, he killed a yellow sun powered Zod to save a family. Unlike the previous incarnation that clearly couldn’t be fucked having to attend court as a witness for the prosecution.

Despite this, almost everyone accused Man of Steel of being a darker take on the character and instantly drew comparisons to The Dark Knight Trilogy. With Christopher Nolan and David Goyer on board, that was inevitable however is it justifiable to assume that these men would add a darker sprinkle to proceedings?

Tim Burton’s Batman was a little more morally unhinged than Nolan’s when you compare them. In the first movie, Batman seems to have no qualms in blowing up henchmen with rockets and throwing people from great heights. But hey, you know, he’s Batman. We can let him away with the odd murder, it’s not like he’s enjoying it. Well… 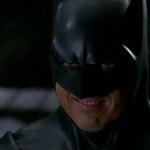 In Batman Returns, you could argue that Bats was on his way to becoming the Dark Dexter. Whilst fighting with the Penguin’s carnival army on the streets of Gotham, he comes across a behemoth of a beast. Batman tries to floor him with one punch but fails to even irritate the brute. What can he do but fight harder, second time lucky and all that? No, instead he straps dynamite to the man’s chest, smiles, hits him again and then throws him down the sewer. An explosion is seen in the background as Batman casually strolls away and no one speaks of it again. Yes, Batman has just killed someone in cold blood and if it seems excessive, it’s because it is. Compare that to Nolan’s “darker” take on the source material. How many people did Batman kill in the whole trilogy? I’m saying two, though he seems pretty cut up about it to be fair. Well,Harvey’s death anyway, with Ra’s Al Ghul’s he seems to be a bit more at ease as he’s managed to convince himself it wasn’t murder.  Though I think beating the man to a pulp and allowing him to die in a fiery train crash is a little more culpable than I think he’s willing to admit. Whatever helps him sleep at night.

So maybe people can cut Man of Steel a little slack? Yes, the film is not without its flaws however let’s not just attack it for what it’s not. So Superman killed Zod. Big fucking deal, Zod is The. Bad. Guy.  It’s not as if he grinned orgasmiscally or made a quip  like “you’re a real pain in the neck.” No, that was his girlfriend that did that before killing Ursa in Superman II.  I’m actually surprised Reeve’s Superman didn’t just whack Luthor while in the Fortress of Solitude. At the least it may have stopped Superman IV from being made.