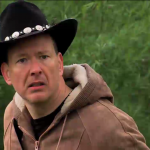 was once told by an award-winning filmmaker that a short film should be no longer than ten minutes. A professional screenwriter advised that if you can reduce the running time you should. This can prove a challenge to most filmmakers that find it difficult to edit their work down so I don’t envy those that try and tell a story in just over  2 minutes.

The Virgin Shorts competition accept films of any genre and style with the stipulation that the submission can be no longer than 2 minutes and 20 seconds long…including credits. This doesn’t stop thousands of directors and producers from submitting their work every year and one such film that was sent to us was Looking for Robin.

While birdwatching one day, two friends get into a discussion about an elusive robin that can command a £500 fee if photographed. Despite the dubiety of the bird’s existence, a third man feels he can cash in by snapping the bird. Nothing prepares him for what he eventually finds however.

Directed by David McCafferty, who also shared writing duties with DJ McCann, the film proves how much can be accomplished in just over 2 minutes. The story maintains a steady pace that slowly builds to the climax with humerous results. Their decision to make a comedy given the time frame is successful as the plot unfolds in a sketch like manner. It has a warmth to it which makes it accessible, making it an easy watch.

Simple and to the point, there is nothing fancy about Looking for Robin however given the final product, that works just fine.