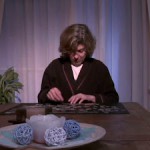 The most effective horror films are the ones that don’t reveal much. Personally I find the Blair Witch Project much more terrifying than Hostel (for example). Granted I wouldn’t be quick to chose on what I’d fate I’d prefer, however when watching a film I find atmosphere wins over gore when it comes to scare factor. And the Puzzle is full of atmosphere.

A mother receives a phone call from her son one night asking for money. She aggressively refuses, apparently this is a common occurrence and she’s sick of it. As she tends to her jigsaw puzzle she realises something is not right and she may not be alone in the house.

The POV shots are clever in letting us know that there is someone in the house without showing us who. Director Davide Melini builds the tension with ease as the film slowly builds up to its shocking climax.

Lead Cachito Noguera puts in a great performance as she spends the majority of the film on screen alone. As the mother we gradually witness her terror consume her before the puzzle is concluded and her fate is revealed.

Arguably more of a thriller than a horror, the presence of the unknown causes the intense feeling of fear that happily allows it to sit in both camps. Suspense filled and nicely shot, the voyeuristic feel of the film allows the viewer to be invested in the tension. Maybe she was best giving him the money.

The film can be viewed below.

One thought on “The Puzzle”