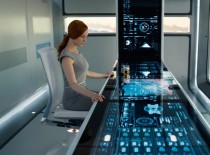 There appears to be two camps out there. one is the Tom Cruise haters. They cannot stand the work of the man no matter what he is involved in. They see him as a clown that is all over the media for all the wrong reasons, be it his relationships or his links to The Church of Scientology. The other group of people are just fans of his work. They separate the persona from the actor and just enjoy his movies.Where Do I stand? Well this review will probably give a few clues.
In Oblivion Cruise is Jack, an engineer who goes by the call sign Tech 49. He has a most unusual job. Earth was the subject of a fierce war with an invading Alien force. The Human race was victorious but at the cost of the Planet itself. The Earth is now a scorched and desolate ruin. The only humans left are Jack and his partner / job controller Victoria. The remaining population has decamped to Io. In order to make the planet habitable there are great floating factories that convert sea water into usable energy on the new human home planet. Jack maintains and repairs the droids that protect these factories from the Scavs, the remnants of the invading force. As they near the end of their mission the Scavs are becoming bolder in their efforts to attack the factories. Jack finds himself having mixed emotions. One one hand he is pleased to be leaving but on the other hand he has doubts and a nagging feeling that something is not right. He has dreams about a woman he has never met and is reluctant to leave his home planet. It doesn’t help him that his memory was wiped five years previously as a precaution against him being captured and revealing secrets to the enemy. The situation comes to a head when he is trying to located a downed droid. He is ambushed and caught by the Scavs.

For the majority of the film it is a three hander with Cruise, Riseborough and Kurylenko the only people on-screen. It works very well. Andrea Riseborough in particular is a good actress and in this case an unsettling presence on-screen. The Central relationship between Jack and Victoria is handled well due to her skill and the mind wipe plot device. You get the sense that she knows more than she is letting on but cannot confirm this as neither main character has the ability to remember anything before the mission began.

This film is a visual delight under the direction of Joseph Kosinski. Making the most of the premise the Earth is made to look absolutely spectacular. Having only seen the film on the small screen I realise that I had missed an opportunity to experience it in its full cinematic glory. In many ways the backdrop is a character in the film as wars have, and still are being fought over it.Although packed with CGI and the annoyance that some of the more familiar landmarks partially survived the war it looks natural and very impressive.

The story takes elements from a number of different Sci-Fi sources. There are touches of Planet of The Apes, Wall-E, The Phantom Menace. Silent Running and any number of nineteen seventies science fiction films. This is no mere rip off and to be fair is greater than the sum of its parts. It is a film that is split into two distinct parts. There is the initial exposition and development which then leads to a more action orientated second half. The first part is the more interesting as it the more original sequence and is well paced and informative. There are hints of what is to come but the film does a good job is keeping you guessing until the reveal.

Overall a well paced and entertaining SCi-Fi adventure that should appeal to more than just the fans of Tom Cruise. Recommended.