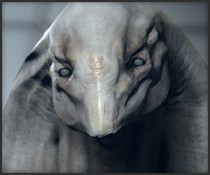 The Sci-Fi short has been recently utilised as a calling card for the artists , technicians and director involved in the film. There are an increasing number of shorts out there that fall into this category. These films follow a basic pattern. There is a heavy and usually very impressive CGI element and a single plot idea to move the visual spectacle onwards. A more recent example of the is the 2013 film R’ha.

There is an interrogation. A humanoid creature, called the R’ha, is being questioned by a machine. When the straightforward pain measures employed do not have the desired effect another method is employed by the mechanoid. Through this technique we are introduced to the back story of the situation. The R’ha  were the defenders of the solar system from all known threats. what they did not account for was an uprising from within. The machines used by the R’ha gained enough intelligence and self awareness to  realise that they would be better off if their creators were eradicated. The R’ha had no chance. The machines swept over the planet destroying all in their path. Only a small force of the guardians were able to evacuate. During this escape the  R’ha under interrogation was captured. The machines are looking for the escapees and the key is the prisoner. Just when he thinks that this is the end for him a chance for escape is presented.

The story will be familiar to anyone who has a passing knowledge of Sci-Fi films and The Terminator series in particular. So it is up to the visuals to present the tale in an engaging way. The film does this with ease. The entire film comprises of CGI. The visuals are rendered superbly giving the action a look and feel that is very natural and very stylised. The entire production design and animation was realised by Kaleb Lechowski. Everything you see comes from his imagination and influences. This guy appears to have a future in the movie business. The short has come to the attention of former George Lucas collaborator Rick McCallum who will be working with Kaleb to fashion the short into a full length movie.