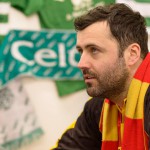 Growing up in Glasgow there is a question that many men will be all to familiar with. “What team do you support?” The question relates to the great football rivalry between Rangers and Celtic, otherwise known as the Old Firm. Two footballing giants that dominate Glaswegian culture. Not that they are the only well known teams the city has to offer. There’s also Partick Thistle.

While walking to see his beloved Partick Thistle one day, Bryan (Richie McColm) is approached by a special police unit. Identifying themselves as the Sectarian Secret Police, Bryan is kidnapped and whisked away to a secret location. Finding himself in a room adorned with the prominent colours of the Old Firm, he is told that he must disown the team he supports and align himself with either Rangers or Celtic.

The issues with sectarianism and the Old Firm is highly contested and widely debated. Writer/Director: Joseph Andrew Mclean makes a lighthearted attempt at portraying Glasgow’s obsession with the Old Firm, focusing on the idea that even supporting another team is laughable. It’s a familiar concept that has plagued football fans that dare go against the grain. Aye, you’re a Thistle fan but who’s your other team? Everyone must have a preference and in Bryan’s case he has to rethink his allegiance or face the consequences. It’s much like the child at school who is in danger of a kicking should he choose poorly. No preference is not acceptable in those circumstances, and the same applies to Bryan.

There’s a lack of depth to the film, however it’s not pretending to solve or analyse in great detail the issues that blight Scottish football nor does it claim to have any answers. As a comical approach to a serious subject it does evoke the required laughs. Which side are you on?