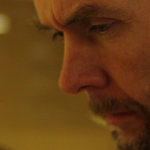 When working with a lack of budget it’s best to keep things simple. There is no point in writing an immense galactic battle when it’s going to look like Space Invaders come the edit. Director Cameron Richardson keeps things simple in You Are Going to Die, however that doesn’t prevent him from being clever.

Douglas (Ro Goodwin) arrives home one night with the intention of going about his mundane life. Watching TV and eating his dinner was as much excitement as he was hoping for. Unfortunately a series of messages being relayed through his electrical devices have a sinister warning for him… he is going to die.

Goodwin is the centre of attention and enjoys the majority of screentime by himself. His portrayal of a man haunted and driven insane by messages predicting his inevitable demise is excellent, as we bear witness to his psyche slowly cracking. The tension moderately increases as Douglas’s fear spirals out of control and he can no longer take anymore.

The simple graphics employed by Richardson add the feel of impending doom without taking us out of the story. They look as genuine as they are effective.

Like I’ve said before, less is more when it comes to instilling terror and Richardson does this here with ease. The faceless antagonist which torments Douglas is effective in it’s task. There’s no fancy backstory, and there needn’t be. A satisfying ending rounds off the film nicely.