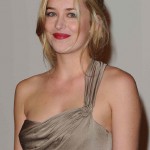 After months of speculation and rumours, the leads of Fifty Shades of Grey have been cast. EL James who was responsible for penning the successful novels announced via her twitter earlier that Dakota Johnson and Charlie Hunnam would be playing lead characters Anastasia and her bondage obsessed lover Christian Grey.

Unless you’ve been in a coma, you’ll know that this is a big deal for about 90% of the female population of the world. It also has the potential to be a more controversial casting decision than Batfleck.

Directed by Sam Taylor-Johnson, the film will be released in the US August next year.