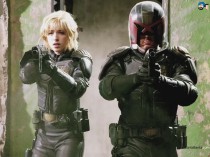 I may as well front up. I am a Judge Dredd fan. I grew up with 2000 AD and many of its stories still rank highly among my favorites. Top of the list are the tales of Dredd and his world. I was one of the fans hotly anticipating the Sly Stallone version of the great lawman. What wasn’t to like? Sly had the presence, was a big star and had a suitable chin for the role. A sure winner. Except the movie not only sucked it also swallowed. Sly was dreadful, the story was god awful and don’t even remind me of have Dredd without his helmet. For a long time Dredd in the movies was poison. So when a film revival of the character was announced it didn’t exactly give me a nice warm glow. Expectations were definitely lowered for this one.

Mega City One, Northern America. A vast city stretching from what was Detroit to the Eastern seaboard. Eight hundred million souls living in high-rise apartments, two hundred storeys in height going by the name of Mega blocks. Unemployment is at ninety-four percent and crime is at critical levels. All that stands before the total break down of society is the justice system. The laws are upheld and applied by the Judges. They are there to deliver instant justice at all times in a swift and uncompromising manner to all offenders that come across their path. The best of them is Judge Dredd (Karl Urban). Assigned to him for assessment is rookie Judge Cassandra Anderson (Olivia Thrilby) His assessment will determine if Anderson makes the grade as a Judge. Anderson has enhanced psychic abilities due to a mutation at birth.

The Judges take a call at the Peach Trees mega block where two individuals have taken a fall from the two hundredth floor while on Slo-Mo, a drug that slows down time to the point where every real-time second last one hundred seconds in the users mind. During their initial investigation the Judges find that they have stumbled into something much bigger than a simple murder. Their prime suspect is MaMa (Lena Headey) who runs a local gang with ruthless efficiency. She is intent on producing and distributing Slo-Mo on a city-wide basis. The Judges present a major problem for her. The gang literally lock down the Mega Block. Dredd and Anderson are cut off from the outside and must battle to Escape.

The first thing that hits you is the scope of the film. Instead of taking on a story that encompasses the vastness of the metropolis, the bulk of the story is confined to one area. This is a very clever move. Within the confines of the Peach trees block we are able to get an intimate introduction to the Dredd and Anderson characters. With the assessment sub plot we get an unforced history of Anderson which feels natural to the story. Dredd of course is fully formed. There is absolutely no character history explained here.

Karl Urban is on top form here. He inhabits the role with gusto. Crucially he doesn’t seem bothered about removing the helmet at any point. The screen character is true to its origins in both dialogue and action. Olivia Thirlby, an actress unknown to me before this role, is really good as the rookie Judge. Her characterisation develops throughout the film going from nervous and insecure to determined and steely by the end.

The film has a unique and rather dirty look to it. The city and the block look grimy and uncared for. The floors of the block are murky and dark as you would expect. This is no perfect futuristic utopia here.  You can almost imagine the smell that goes along with it. The look adds to the atmosphere of the movie. Shot in 3D there are a number of touches that lend itself to the effect. The Slo-Mo scenes are good examples of this. Even in 2D the effects are still impressive and do not take you out of the experience.

The character of MaMa is the embodiment of the state of the world. In one of her less glamorous roles, Lena Headey with facial scars and blackened teeth represents everything that is wrong with the city. The disease of future living that affects the population in the form of an enemy of the law.

The small touches for the Dredd fans were appreciated with some of the obvious references in the form of the bike, the Lawgiver pistol and the Judges shield were augmented with passing references like the Chopper lives graffiti.

With such low expectations I was totally surprised at how good the film was. The film is for an adult audience. The violence is graphic and uncompromising. To its credit it is not toned done in the same way as Taken 2 or Die Hard 5 to gain a larger audience. A bold move on the part of the film makers. unfortunately this has meant that the film did not do particularly well at the box office. At the time of writing a sequel is not being considered although fans are mobilising in their support of the notion. With a good showing in the Blu Ray and DVD market the film may jut show that another visit to Mega City would be worthwhile.