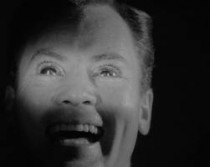 The Nineteen Fifties saw the rise of the Sci-Fi movie. The popularity of some medium budget films led to a torrent of low budget B-Movies which followed a fairly standard format. Often dismissed due to the financial limitations placed on some of the films have surprisingly stood the test of time and become cult classics. Others sadly have not aged so well and today are viewed curiosity pieces and examples of how bad cinema could be during the Fifties. An example of a film that is somewhere in the middle is The Brain From Planet Arous.

A mysterious light is seen in the night sky descending at a rapid rate. It crashes into a mountainside in a burst of flame. several miles away Steve (John Ager) and Dan (Robert Fuller), a couple of nuclear scientists are monitoring radiation levels. The readings they are receiving are strange to say the least.The duo discover that he source of the odd readings is the aptly named mystery mountain. They head off into the desert and discover a cave that has been blasted out of the side of the mountain. While exploring the cave they encounter a blinding light that kills Dan and takes possession of Steve. After being missing  for a week Steve returns to his home and his girl Sally (Joyce Meadows). Steve is a changed man and begins acting strangely.

When he returns to his lab the change is explained. Gor a floating Alien brain from the planet Arous has taken possession of Steve’s mind and controls his every thought and movement. Gor is intent on taking over the world in order to raise a space army to destroy his foes. He also has the hots for sally as he has never experienced the human emotion of hornyness before. Sally is distraught at he changes in Steve and travels to mystery mountain to find out what happened. There she meets the good Alien brain Val who is hunting down the criminal Gor. Between them they work out a plan to save Steve and apprehend Gor. Gor meanwhile is hatching his plan for domination with a demonstration of his power. 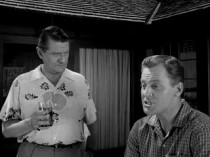 In many ways this is a typical nineteen fifties Sci-Fi film. It is full of plot holes, terrible dialogue and continuity errors not to mention the wooden acting. Surprisingly this doesn’t detract from the enjoyment of the film. John Ager playing Steve is having a great time. He hams it up in style. The scenes where Gor inhabits him are quite amusing as we see Steve writhing about  and then appear with Silver eyes. due to the nature of the film the majority of the effects were done in  isolation which meant that the principles were reacting to something that was off-screen. It looks odd based on today’s effects which normally have the actor interacting with the effect on-screen.

The other cast members are hindered by a poor script and a lack of character development. Most arrive fully formed and only there as plot devices. His friend dying horribly is used to introduce Gor to the audience. Steve’s girlfriend seems to have the single purpose of channeling the needs of the good alien. So it doesn’t give them much scope. Taking the lead from John Ager , they all exaggerate their characters almost as if they are trying to out do each other. It makes for entertaining viewing.

As with most B-Movies the film doesn’t hang about and it zips through its seventy one minute run time. You get the feeling that the writers didn’t quite know how to end the film so a rather out of place end game ensues that leaves the audience scratching its collective head in puzzlement.

Overall a typical B-Movie that provides an entertaining distraction. Just don’t think about it too much. Recommended.

One thought on “The Brain From Planet Arous”