If you ask someone to name a Woody Allen film the chances are that one of the top answers provided will be Annie Hall. In many ways it was the film that cemented his reputation with international film audiences. Hailed as a triumph at the time it was nominated and won four Oscars. it marked the start of Woody Allen’s superstar period where everything he worked on was praised and the box office returns made United Artists very happy.

Right from the start the film defies standard movie logic. Alvy Singer is speaking directly to camera. Immediately  the fourth wall is broken as he tells a joke to explain the tale he is about to impart. Another break with the standard is that he begins at the end. At this point his relationship with Annie is over and he is in fact looking back trying to figure out the moment where things started to go wrong.

Alvy’s problems stem from the fact that he tries too hard. With his first wife he was constantly cracking jokes and trying to get away from her literary friends. He panders to his wife at times in the hope that she will succumb to his charms in the bedroom. Alas he finds himself alone after he finds that he cannot live with her any longer. With the help of a friend he meets Annie. She is a breath of fresh air in his life. Immediately there is a connection. Alvy has never been happier. He then goes about trying to educate Annie with books which have death in the title and imposing his neurosis on her. The beginning of the end for their relationship. 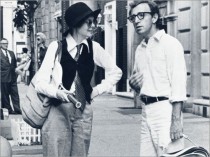 This was the most accomplished film of Woody Allen’s to date. In terms of the writing it is spot on.  Rather than making his character the centre of attention he shares the screen time and the spotlight with the Diane Keaton character. The title character of Annie Hall is a superb creation. It is well written and has a lot of depth. No longer relying on a stream of one liners the script takes its time to develop the characters and situations without reverting to slapstick for cheap laughs. A growing maturity and confidence in Allen’s ability on show here. It doesn’t hurt if you have an actress of Diane Keaton’s calibre fleshing out the role. She is superb as the kooky and flighty character in the beginning who changes subtly as the film develops. It can be seen that her development is in some way due to the Alvy character. She is forced to impose her own will against the almost domineering presence of  her boyfriend.

Woody Allen has developed into a unique actor by this time. It took him some time to graduate from the stand up character he brought to his early films into the polished actor he presents in this film. This may be in part due to the fact that he is playing the part of a stand up comedian and can easily relate to and inhabit the character. Whatever the reason it saw him getting nominated by the Academy for best actor for the first time in his career.

The film features a number of very famous faces in early roles either as supporting players of blink and you will miss them extras. Christopher Walken features  in a (very) early role and Jeff Goldblum and Sigourney Weaver pop up in the later stages of the film. This would mark a trend that continues to this day for any number of actors willing to commit to working with Allen in any project of his choosing. Some, it has to be said, were more successful than others.

A major risk taken throughout the film was the frequent shots direct to camera. On several occasions the action is in effect paused while Alvy emphasises a particular point. This takes the form of either a monologue or interactions with passers by in the street. Surprisingly it doesn’t take you out of the film at all as it is so well written.