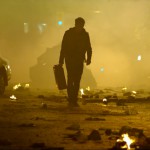 There has been a trend recentlty of concert films being given a theatrical release. The majority of these have been aimed at a younger audience, with stars such as Justin Bieber and One Direction benefitting at the box office. A common theme with most concert films is also the premise. A documentary on the band will be interweaved with live footage, sometimes from a specific tour or a legendary gig.

The rules aren’t set in stone, but there’s usually a  recognisable formula. This is what makes Metallica: Through the Never all the more intriguing. The documentary approach is abandoned to tell a fictional story accompanied by a live show. It sounds ambitious, and maybe a little silly,  but does it work?

The story revolves around Trip (Dane Dehaan), a young roadie for the band who is tasked with a simple errand. Drive across town and pick up a valuable item that the band requires. Seem simple enough. Except poor Trip’s van gets hit by a speeding motorist propelling him into a nightmarish world where order has been abandoned. Nevertheless, our silent hero makes his trek on foot where he finds himself in the centre of a huge battle between anarchists and riot police. To make matters worse, he pisses off a malevolent death like figure on horseback who is intent on stringing him up.

The plot of the film shouldn’t be put under too much scrutiny as it exists as a tool for the real star of the film. The music. Presented in IMAX the sound is incredible. The opening riffs of ‘Creeping Death’ are thunderous as the concert gets underway. Metallica themselves have released many concert performances over the years and it would take something special for this one to stand out. Thankfully Nimrod Antal is more than up to the task as he adds a cinematic quality that sets it apart from its predecessors. The picture is crystal clear to the point that even the 3D isn’t distracting. It still trails at times however it’s a huge improvement from the sub-standard of 3D we’ve unfortunately been subjected to over the years. 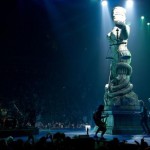 The stage show is magnificent as all the stops are pulled out, including homages to previous tours. A giant Lady Justice is erected in front of our eyes only for it to be torn back down minutes later. Tesla coils and a massive electric chair descend in fantastic fashion during ‘Ride the Lightning’ without erring on the side of Spinal Tap absurdity. ‘One’ is a particular visual treat as bullets appear to rain down onto the stage which serves as a massive video screen in its own right. Even when the band strip it back for the finale, the sheer sense of awe is not lost.

A tale of two stories? Not quite. The set-pieces involving Trip is a narrative which runs parallel with the track listing. The plot isn’t a literal representation instead acting as a symbolic fusion between storytelling and music. An overblown music video then? Not entirely. Although it could be argued that’s all the film is, such a condescending criticism doesn’t do the combined vision of director and band any justice. There’s a tale to be told here albeit in a surreal way with nods to conventional drama. The object that Trip seeks out is nothing more than a MacGuffin, homaging Pulp Fiction, while ‘Ride the Lightning’ features a clever auditory use of Chekhov’s Gun.

A truly immersive cinematic experience, that fuses the music of the world’s biggest metal band with a visual treat. 3D aside, no cheap gimmicks are needed to grip the audience. Just good old fashioned slick camera work and impressive editing to create something that little bit different from the norm. Loud, fast and with a lot of style. The bar of the concert film has been well and truly raised. The only thing that appeared to be absent is the title track itself but with such an impressive back catalogue on display, it’s not even missed.

One thought on “Metallica: Through The Never”