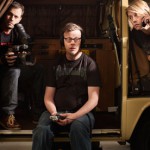 Meet Englishman Tom Spicer. He suffers from Fragile X Syndrome, a form of autism. He has one dream in life. To meet his hero Lars Ulrich, the drummer of the biggest heavy metal band on the planet. Can his siblings make Tom’s dream come true and unite him with his idol? Well, it’s not going to be easy.

Kate Spicer is Tom’s sister and a journalist. She feels that she can make use of her contacts to ensure Tom’s dream is fulfilled. Their brother Will is a filmmaker and decides to document the journey and Mission to Lars is born. It’s not going to be easy though as the Spicer’s are in England while Metallica are touring the US. Plus there’s the subject of Tom’s condition.

Symptoms of Fragile X Syndrome include social anxiety and a stern stubbornness that pushes the patience of Will and Kate. Both of them love their brother, but like all siblings, they’ll fight and irritate each other. Events likely to happen when you’re cooped up in a camper van driving through the Nevada desert.

The film makes no apologies for Tom nor does it exploit his condition. After Kate arranges for him to go see Metallica, Tom decides he doesn’t want to go. This provides an unlikely obstacle which could hinder the goal of the film. After all the effort Kate and Will put in to make Tom’s dream come true, what if it isn’t a case of Lars not agreeing to meet Tom, but Tom deciding he doesn’t want to meet Lars? By his own mouth, he states time and again that he’s changed his mind. Not that Will and Kate are ready to give up so easily.

The film has a certain warmth to it that makes us feel sympathetic of the trio. Tom’s condition may give people the ‘awww…’ factor however it’s hard not to empathise with his siblings as they struggle to deal with a brother they are discovering they don’t know that well.

It wouldn’t be much of a story if there wasn’t a payoff, and *spoiler alert* Kate and Will succeed in arranging for Tom to meet his hero. This is the defining point of the film and it rounds if off nicely. The camera takes a step back as Lars and Tom are allowed to converse, with the drummer showing an interest in his fan without coming across as condescending or false. Whether he’s playing up to the cameras isn’t important. What the event means to Tom is evident in his wide smile, which proves to be infectious for the viewer. Metallica are the biggest metal band on the planet and that has not prevented Tom’s dream from coming true.

Not that Tom’s dream is the only story here. Just as important is the relationship of the family which is laid bare for all to see. It’s as much about Kate and Will bonding with their brother than it is him meeting Lars. Heart warming and life affirming, Mission to Lars will make you smile.