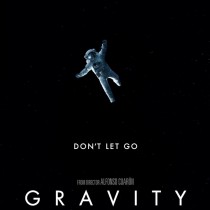 Anyone who watched the trailers for Gravity when they appeared much earlier this year would have been more than a little excited. The gut wrenching visuals revealed in the preview promised so much. I was one of those people; however as the film grew closer to release I heard snippets of spoilers here and there and surmised that this was just a one woman show for Sandra Bullock, an actress I really don’t rate, and so I wrote it off as something I’ll catch up on at home. This evening I was bored and so I wandered into my local multiplex and Gravity in 3D was the next film available (not involving animated planes or snails at any rate) so I paid my money and sat down expecting to be bored… Boy was I wrong!

The plot is simple. Sandra Bullock plays medical engineer Ryan Stone, whose astronaut training has been rushed so that she can install an undisclosed piece of technology on the Hubble Telescope. George Clooney plays veteran astronaut Matt Kowalski on his last mission, and off camera something goes wrong on a Russian satellite causing a debris field to head their way. This sea of ‘faster than a speeding bullet’ projectiles proceeds to wreck the Shuttle and Hubble, kill the other three members of the crew and generally kick off a really lousy day for Ryan and Matt.

Rounding off the cast list are 5 other actors’ voices and one very big and beautiful planet. It is that planet that is the star of the show. If I had one dream it would be to view Earth from orbit and the views we get to see, in the less frantic moments of this film, are absolutely magnificent. Probably my favourite visual is of the Aurora Borealis seen from space, but there are plenty of others that are stunning too, so hats off to writer/director Alfonso Cuarón and his regular director of photography Emmanuel Lubezki for producing something so beautiful.

Gravity clocks in at 91 minutes, which is very short compared to most other recent blockbusters and it is better for it. We have no extraneous side plots and no overlong scenes of random objects in space. What visuals we get are enough and the editing keeps the film moving along so we don’t get bored or frustrated but instead get a very intense 10 minutes of setup and 80 minutes of action and resolution.

I’ll touch on George Clooney first. I have always liked him and his role here is marvellously understated. He is the calm antithesis to Ryan’s nausea and inexperience and I was rooting for him all the way, even though his character appeared doomed.

Bullock is also really good. I don’t think we are into Oscar contendership, but this is certainly the best non-comedic role I have seen her take on. She gets her little Barbarella moment, stripping in zero gravity and is very solid throughout.

Curaron has clearly been influenced by films like Kubrick’s 2001 and the James Cameron’s Aliens. We even get a nod to Jaws at one point, which I won’t spoil. The pace of this movie is also a bit like Jaws, moving from calmness to frenetic action and back to the peace of space throughout, before climaxing in a big explosion.

The writing and the plot are not far fetched at all and there is only one moment that bugged me, that being when Ryan finally found her inner calm and turned into a ‘wonder-woman’ astronaut and even that wasn’t enough to spoil what turned out to be one of the best films of 2013 for me.

Before I wrap this up I want to touch on the 3D… It is good… Really good! In fact this is the best 3D film I have seen since Avatar. I have seen plenty of recent films spoiled by 3D (Star Trek: Into Darkness – I’m looking at you) but I have to recommend that you see Gravity on the big screen in 3D. Also sit nearer the front than you normally would so that the vastness of space fills your vision.

Gravity is a beautiful movie. Gravity is worth 91 minutes of your time. Gravity is also worth the extra money for the 3D showing. JUST DON’T EAT CRUNCHY FOOD as Gravity has a lot of totally silent moments too! Go see it.