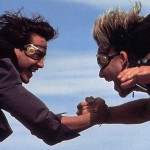 Point Break is a classic. Granted it’s a cult classic, it doesn’t change the fact that the film has proved influential to the action bromance genre whether you think that is a good thing or not. Vin Diesel basically owns his career to this tale of bank-robbing surfers that explore the boundaries of friendship and morality. While being cool.

Rumours of a sequel never went away until the death of Patrick Swayze, who played surfing villain Bodhie, in 2009. When Swayze died Alcon Entertainment shifted their focus to remaking the film. A film that wasn’t even 20 years old by this point.

Producer Andrew Kosove told Indiewire earlier this year, “It’s not a literal remake of the original the way Footloose was,”

He added that the new film would have “elements of the original and it’s not just surfing, it’s other kinds of extreme sports, but surfing is very, very prominent in the story”.

No cast has been announced, but a script has been written by Kurt Wimmer, who penned Angelina Jolie thriller Salt. Directorial duties will be handled by Ericson Core, a cinematographer on the Fast And Furious series (the irony).

Not impressed? Neither was Keanu Reeves who originally played undercover FBI agent Johnny Utah. Speaking to BBC Radio 5 live, the actor said the remake “sounds very exciting – but is it a good thing? I don’t know”.

Asked if he’d be involved he said “Absolutely not. It’s not my place.”

Which is probably a good thing. However, the 49 year old is looking to revisit one of his earlier roles by making a third installment of Bill and Ted….