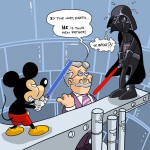 People have short memories. This is of particular benefit to those who like to complain as it gives them the opportunity to continue voicing their grievances even if it contradicts their previous feelings on a subject. This was never more evident than on October 31st 2012. A historic day for film as Disney announced that they were buying the Star Wars franchise from George Lucas for a little over 4 billion USD with the intention of adding more films to the series. The internet went into meltdown as fan boys spewed vitriol over social media, prophesying the death and ruination of their beloved Empire. Which sounded very familiar.

When Lucas announced he was going to release three prequels to his acclaimed series, the excitement and anticipation was off the charts. Then something happened. He released Episode I. The midi-chlorians and Jar Jar Binks were born, having as much effect on the audience as the Death Star had on Alderaan. Not that the prequels are Lucas’s only crime (I actually think Episodes I and III aren’t bad) he pissed off everyone prior to that by changing scenes in the original trilogy. Han and Greedo, anyone?

Despite all the hatred directed at Disney, there was a pocket of resistance to the status quo that welcomed the acquisition. Disney also bought Marvel Entertainment for a similar price and it’s done them no harm with a few blockbusters produced for good measure. Still, people are precious about what they believe is theirs and the latest news that Disney is planning to butcher the Star Wars Expanded Universe in order to streamline the film canon is likely to split opinion.

The Star Wars EU is impressive. Many authors have delved into Lucas’s creation and continued the story through novels, TV, comics, and video games. Lucasfilm held the EU in such high regard that they created a team specifically to monitor it and maintain the continuity between it and Lucas’s films. The company devoted time to ensuring that nothing in the EU contradicted works of other authors but most importantly anything in the films. Although Lucas would include aspects of the EU to the films (the name of planet Coruscant first appeared in Timothy Zahn’s novel Heir to the Empire before being used later in the prequel trilogy) he retained ultimate creative control over the EU to the extent that if his films contradicted the already existing works, that world was to be retconned to suit his vision.

When the Matrix sequels were announced, the Wachowski brothers expanded the universe. Video games, comics and an animated series were released to accompany the films and were considered canon that existed within the world and story of the films. Lucas makes this clear that this is not the case with Star Wars;

“That’s a different world than my world. But I do try to keep it consistent. When I said [other people] could make their own Star Wars stories, we decided that, like Star Trek, we would have two universes: My universe and then this other one.” (from the Sci-fi magazine Starlog 337 via Wikipedia) 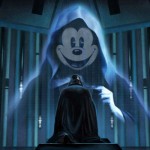 In George Lucas’s case the author is not dead.  Star Wars is his baby and he could do what he wanted with it. The EU didn’t have to bow to him, but they were to be submissive to the unsurpassable creator. Now however, Star Wars is no longer his to do as he pleases. Disney has taken a battered child with the intention of nursing it back to health. The EU may have flourished without too much meddling from Lucas but the films have taking an absolute kicking as Lucas refused to leave them be.

Disney aren’t pressing a reset button and starting from scratch. It might seem harsh to discard decades of work that contributed to the EU but as Lucas showed little regard to it in his films why should Disney take any flak for wanting to do their own thing? Not all Star Wars fans are devoted to the EU and rely only on the films to tell the story. By cutting up the EU, Disney aren’t eradicating years of history and hard work, the material will still be there for fans to enjoy should the company decide not to promote it to canon. They’re just not going to let it dictate their ideas for the films. Much like Lucas didn’t.

With J.J. Abrams signed up to direct and Lawrence Kasdan on scripting duties, the franchise is in good hands. When was the last time you could have said that?