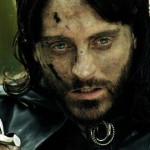 Fan-films are those horrible little cheap movies that usually suck the magic out of the very thing they’re trying to pay tribute too.  No-one can doubt the directors’ passion as they try and emulate the world of which they are such devotees, or the hard work they put in to create their zealous masterpiece.  No, it is the mix of bad acting, cheap sets, home-made costumes and amateur special effects that make these abominations exceptionally terrible and because of this I try to avoid them whenever I can.

The Hunt for Gollum,  released online in 2009, is unfortunately a fan-film but unlike the others, this one defies all perceived conventions in that it is actually quite good.

It is the story of Aragorn’s search for Gollum, set just after Bilbo’s party in The Fellowship of the Ring and before he meets them at the inn in Bree.  This part of the story will briefly be recounted by Gandalf in The Fellowship of the Ring but The Hunt for Gollum just fills it out more and gives us an extra visual of what is a very important part of the story.

One of the greatest things about this little forty minute gem is the casting.  Sure it’s not Sir Ian McKellen or Viggo Mortensen but Patrick O’Connor as Gandalf, and Adrian Webster as Aragorn play their parts so well that after the first few minutes you’ll forget the differences.  The script could easily have been taken straight from Peter Jackson’s spare notes as the style is identical to that of the original trilogy, and executed perfectly by the actors.

During Aragorn’s travels he encounters easily recognisable adversaries such as the fearsome Ringwraiths and the thuggish Orcs.  Again, the characters are played faultlessly and the costumes are so good you could easily believe they were stolen from the original trilogy’s wardrobe. The shots of Smeagol, which would no doubt be the most expensive parts, are very cleverly done as when he isn’t lurking just out of shot, he spends his time trapped inside a sack.

It’s during the fight scenes however that the film really falls short.  They’re not terrible, not buy a long shot, but there were times I felt I was watching a live action roleplay re-enactment.  They were slow and at times contrived, shattering any illusion of realism the film had built up until then.  A shame though, as some of the death scenes from the Orcs are very well, and brutally, done.

This film is a must see for Lord of the Rings fans everywhere.  It provides a small insight into a Ranger’s life as well as filling out a small hole in the original trilogy.  It states at the end of the film that all scenes were made completely from scratch which I found surprising seeing as I thought I recognised some of the shots from the original trilogy.  This just goes to show the detail that has went into shooting it in the style of the Peter Jackson films which again, just makes it all the more impressive.

The Hunt for Gollum can be watched here for free.