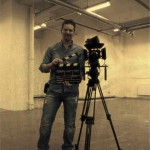 The Scottish town of Falkirk isn’t known for its blazing shootouts and gun toting locals however it hasn’t stopped one local filmmaker from portraying it as such. Simon Jake Gillespie has released three feature films (with a fourth on the way) through his production company Haggis Western Films. “Ive always had a love for Spaghetti Westerns”, He tells us. “I thought that if Italy has Spaghetti then Scotland can have Haggis.” Although the company doesn’t make Westerns “yet,” his first two films The Wild Side of Life and The Cowboy Court are modern interpretations of the genre. Moviescramble caught up with Simon recently to discuss his films, his plans and the controversial subject of no pay no way.

What inspired you to get into filmmaking?

I used to watch a lot of films with my Granddad when I was a kid and I was always curious to how they were put together. I also loved the way that for the whole time of the film you were transported to another world. I was always pretending to be someone else with my friends, this was the seed that would grow into a passion. I have a mad imagination which also helps.

What films did you watch with your granddad growing up and what one specifically sticks in your mind?

I think one of the films we must have watched a few times was The Searchers, in fact probably anything with John Wayne in it. The Good The Bad And The Ugly was another . 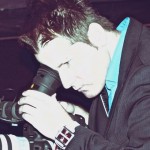 Do you have a technical or academic background in the profession?

I am self taught. I just bought myself a small camcorder to get into filming and learn different shots. I learned how to edit on Apple iMovie on an Apple Emac. I made a few mistakes on the way but you learn from them and I’m stubborn when it comes to instruction manuals. I use them for reference when there’s a problem or something I can’t get my head around. I think the best way to learn is to get out there and make a film, get your hands dirty.

You star, direct, shoot and edit your films. Do you like the pressure or are you looking to share the burden?

With my first two films I did everything which did put a lot of pressure on me but I wanted to learn all the aspects of filmmaking. With Setting Rainbow I knew I had to share the burden. My good friend Barry Frame who is a master with sound production came on board and it definitely helped as the film sounds fantastic. James Frame who has a lot of experience in film came on board to assist with directing duties and again this has helped so much especially when I’m in front of the camera.

What issues have you encountered in making your films?

Location issues have always been a problem , because the films are low budget you have to use your imagination a bit more. In one of the films we used five rooms in my mums house. One room was a police office, we even used one as a hotel room in America.

Which one of your films are you most proud of and why?

I’m proud of each film in different ways . The first film Wild Side Of Life I was just proud that we managed to get it all together to show it. If I was to pick one though I think I would have to say Setting Rainbow as it was more of a team effort and its had the best feedback from all my films. It was also technically far superior in everything compared with my first films.

Your films are very violent, do they cause any controversy?

The first film Wild Side Of Life took a bit of criticism about the violence in it but I think its just everyday life. Switch on the news and you’ll see just as much if not more. I don’t add any violence unless its justified in the scene, however looking back I do think I added too much swearing in that film but you learn from it. 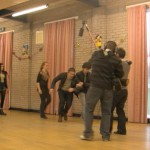 Setting Rainbow sees a departure from your earlier violent works. Was this a conscious decision on your part?

I didn’t really go out my way to make it less violent, it was just the way the story took shape. There are still a few violent scenes in the film though. My other two films were exaggerated slightly with the violence and characters but this film keeps it real. I think this makes the violence a lot more shocking so maybe less is more in this film.

When will Setting Rainbow be available to the public, are your other films available?

I’ve always said that it will take one film to make it for the rest of the catalogue to be seen. I’ve got a lot of faith in Setting Rainbow, if we can get it into Film festivals then hopefully we can get a distribution deal so anyone wanting to see it can.

Do you receive any financing for your films?

I financed my last three films myself but for my new film The Last Love Letter we are looking to gain finance.

Do you believe that funding available for filmmakers in Scotland is catered to the middle classes?

I may have a different answer after trying to gain finance myself  though I would love to think its down to how good the script is.

What’s your opinion on No pay No way?

For my first two films I used mostly friends and family who came along and acted for me. I was very lucky in the fact that it worked well as it gave those films a realistic feel and everyone got to see themselves up on the big screen at Cineworld which was an amazing experience for myself and them. I spent nearly £10,000 and upwards on equipment which I have never made back but a few people from the first two films have managed to go onto other productions through the money I’ve spent. That’s one side of the story. With Setting Rainbow I managed to pull in a 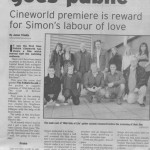 few people with acting experience which was great. I told them at the beginning we had no budget and everyone agreed to come on board for free to gain experience in film and in the hope that I would hire them for new projects when the money comes in. That’s something I won’t forget. If any of my past films were to suddenly make a lot of money then the rewards would be given to the people who were involved. People who make films with no budget are not forcing people to join their productions to work for free, the choice is theirs. I agree that you can’t work for free all the time but sometimes those free gigs can give you the experience and confidence to get paid work. I’m hoping that we can get funding for our new film, we’re looking at ways just now so that I can pay my cast and crew what they deserve. In the past it wasn’t a case of I didn’t want to pay people , I just couldn’t as we had no money. We are a non-profit organisation. What I do hate though is filmmakers not paying their cast and crew money when they’ve been told they will. As long as you have laid everything down before filming it is then up to that person to stay or walk away.

If I put a gun to your head and you had to choose, what would you say is your favourite film of all time?

If it came down to that I would have to say The Good The Bad And The Ugly but if it was Russian Roulette we were playing then my equal first would be Once Upon A Time In The West.

Links to Simon’s work can be found below.