“You have all the money in the world. Do you really need everyone else’s?” Jordan Belfort came to Wall Street on public transport. A wide-eyed, idealistic young man hoping to come to New York to live the American Dream. Armed with youth and a good sales technique, he was convinced he would become a millionaire. He was wrong. He became a multi-millionaire. And along the way, he lost his two wives, his children, his business, his car, his yacht, his freedom and several friends. Did he care? “Absolutely fucking not.”

Ironically, Belfort (Leonardo DiCaprio) begins the film being burned by the career he so badly craves. Treated like “less than pond scum” by the man charged with training him, and ultimately unemployed when the stock market crashes, it might be enough to make some people consider a change in career. Undeterred by the fickle nature of the market, Belfort starts out on his own and is seemingly able to go from nothing to earning $72,000 a week in a matter of months. Talk about living the American Dream. Fast-paced, with a pounding soundtrack and acid-bright settings, The Wolf of Wall Street charts Belfort’s rise and fall and rise and fall.  As he becomes more successful, his tan becomes darker, his hair sleeker, his suits tighter, his behaviour …  In Belfort, Martin Scorsese finds the ultimate drug-taking, wife-beating, money-grubbing, dwarf-tossing, yacht-owning, lie-telling blue-eyed boy. Is Belfort despicable? Yes. Would you turn down a chance to spend a day in his lifestyle? Probably not. 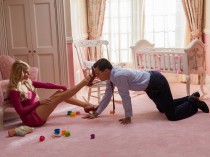 Blazing a trail that would make Gordon Gecko blush, Belfort embarks upon establishing his own stock-broking company along with a band of small-time pot dealers from his home town. There is barely a mention of the postmen, bin men, teachers and policemen they are robbing from. It’s just business. Stratton Oakmont – the company with the name you can trust – is the ultimate boys club. Bad behaviour of any kind is simply dismissed as ‘just work’. They lie for each other, they supply drugs to each other, they buy prostitutes for each other. And here is where the film takes a deeply nasty tone. There is a huge wave of misogyny sweeping over Stratton Oakmont. Women are there for playthings; they are very much the Little Red Riding Hood to this Big, Bad Wolf. They are always described in terms of their – ahem – physical attributes. Belfort’s first wife, who stood by him when he was unemployed and warned him against robbing from the poor, is cast aside for a young blonde model with big boobs. And forget the sex, drugs and rock’n’roll,  the most horrifying moment of the film is watching Belfort and his employees cheer and whistle as a female colleague has her head shaved for a hefty sum. While they clamber on their desks and chatter like monkeys, the camera briefly glimpses upon the sobbing young woman, clutching strands of her hair in her hands. She lets the money slip out of her grasp. I don’t recall seeing her again for the rest of the film; another toy cast aside.

DiCaprio gives a highly energetic and charismatic performance as Belfort. His direct address to the camera, as if he were giving us insider tips, makes it easy to see why many people were so entranced by this motivational, aspirational young man. All the cheeky winks and asides are far more seductive than seeing his latest sports car. The speeches he gives on the trade floor are reminiscent of the feverish rants of a television evangelist. Money is his Messiah. He baits his employees with a Promised Land of riches and their rights to them as Americans. Belfort may be a wolf but they are all animals: beating their chests, bearing their teeth and hungry for the big kill.  Those that falter along the path, either through death or imprisonment, are mentioned only fleetingly as Belfort crusades towards financial affluence and moral bankruptcy. Failure is not an option for the man who never takes no for an answer.

Scorsese does encourage us to laugh at Belfort and his cronies to a certain extent. Their excessive behavior can, at times, seem so extreme it can hardly be true. Jonah Hill excels as Belfort’s best friend Donnie Azoff, with his ludicrously bright teeth and even brighter shirts. He is a clown-like figure: he is not as tall, slim or smart as Belfort. For some reason, he doesn’t seem quite as devious or despicable. Yet he cannot be dismissed as entirely oafish – he was still ciphering money and doing drugs like the rest of them. Meanwhile, watching Belfort – the man who has everything – crawl to his car, drooling and semi-paralysed due to a delayed reaction to his drug of choice, is laughable. A man who strides confidently into nightclubs and yachts reduced to wriggling on his stomach or throwing himself down some stairs seems almost like a small slice of justice.

The film has left many feeling shocked and angry at Scorsese’s alleged glorification of excess and indulgence. It does not explore the consequences of what Belfort did to the average, hard-working people whose trust he abused and whose precious savings he stole. In fact, the end of the film sets Belfort up as a motivational speaker offering tips on how to sell to poor, dollar-paying shmucks desperate to learn the secrets of his success. He hasn’t learned anything. He’s still taking money in exchange for his knowledge. The film offers no apology for Belfort or his lifestyle. But why should it? Neither did he.