“Sin? What sin? A man can do what he wants with his property,” hisses Edwin Epps as he beats one of his slaves to within an inch of her life. In this sentence he sums up the entire moral philosophy of the slave trade. It didn’t matter how a master treated his slaves: they were a commodity, easily replaced, disposable.

The harrowing depiction of Solomon Northup’s kidnap and enslavement may seem like yet another Hollywood drama condemning the cursed trade. Yet it is so much more. Based on Northup’s self-penned memoirs, Steve McQueen’s film seems far more alive and vivid than any other attempt to give African American slaves cinematic representation because it can be pin-pointed to a single voice. A single voice representative of a collective misery.

The film’s pace is almost defined by Hans Zimmer’s sumptuous musical score. Slow, sonorous strokes of a cello emphasise the gruelling daily grind of a life spent in shackles; a life spent wishing to be back in the arms of your family. Contrasted with the short, sharp plucking of a violin like the racing heartbeat of a slave, fraught with fear of his master’s mood. The music echoes the juxtaposition between scenes of frenzied violence and scenes where all there is stillness. This does seem to be a film of contrasts: right and wrong, intelligence and ignorance, grief and fortitude, life and death. 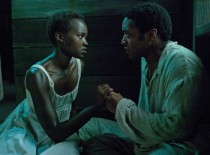 Chiwetel Ejiofor’s performance as Solomon is a striking one. He is not the thankful slave Hollywood once tried to impose on us, nor is a vengeful one. His goal is simple: to be reunited with his family and regain his freedom. Life on the plantation is as alien to him as it would be his masters; his reality is of a free, respectable life in New York. HE  He cannot allow himself to wallow in grief, which makes the few tears he does shed all the more poignant. His subtle performance is echoed by the rows of expressionless faces that greet him as he makes his way down the plantation rows. These are the faces of people who have been broken by the threat of the whip. They have no hope for freedom as Solomon does; their only release would be an early death. If Ejiofor is restrained then Michael Fassbender puts in a wild and manic performance as plantation master Edwin Epps. Whilst Fassbender may not be the portly, ageing man in Northup’s memoirs, he certainly encapsulates the terrifying depravity of the man. A man who lusts after his slaves but hates himself for it; a man who overindulges in drink and rejects his wife whilst preaching scripture. His graphic flagellation of Patsey (Lupita Nyong’o) is certainly disturbing in its violence – the explicit and excess being a trademark of McQueen’s – but is compelling viewing because it focusses on Fassbender and his reaction to his own behaviour. He seems a confusing mixture of insane and haunted.

The extremity of this attack – scored by weary grunts, the crack of the whip, the sound of ripping flesh and Patsey’s searing wails – is easily the most shocking moment of the film. Yet the attempted lynching of Solomon by the sadistic overseer Tibeats (Paul Dano) is equalling as breath-taking in its silence and its lengthiness. The camera focuses on Solomon’s toes, clutching at the mud which melts in the unforgiving Georgia heat. There is no sound except the squelch of his shoes, clinging on for life. The camera pans out, revealing that – whilst Solomon wriggles and struggles – life on the plantation around him continues. Desensitised to violence or simply too afraid to help, his fellow slaves continue on about their business while the camera lingers on his gasping attempts to remain alive.

By far the most hauntingly beautiful moment of the film is a relatively short scene which begins with a close-up on Solomon’s face as looks out beyond the plantation. Slowly, he turns his huge, unblinking, tear-filled eyes to the audience and meets our gaze. He pleads with us: “You see what is happening here. Help me. Help us.” Suddenly, we are complicit in everything that has happened. It makes for very uncomfortable viewing.

Critics have accused McQueen of creating a sensationalist, patronising take on the slave trade. I have to disagree. Certainly, there are moments of deeply disturbing violence but this is not news. Reports of such behaviour from plantation masters have long been acknowledged. McQueen does not linger on images of wounds or sores; these are fleeting. What he does create is a shocking and, perhaps, unnerving portrayal of some of the worst human traits and behaviours ever witnessed. Northup did not receive any compensation or apology for his treatment. To me, that is more upsetting than a shot of a bloodied back.