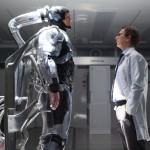 Remakes/reboots/re…whatever you want to call them, are generally met with scepticism and keyboard sabre rattling. News that MGM would be resurrecting the RoboCop franchise was met with similar disdain. With Darren Aronofsky attached to direct, interest in the project piqued as quickly as it fell at the announcement that he had vacated the role. Award winning filmmaker Jose Padilha was then revealed as the man who would reintroduce the franchise to cinema goers but enthusiasm was low. Stars such as Gary Oldman, Michael Keaton and Samuel L. Jackson got people curious but Padilha’s film was standing in the very big shadow of Paul Verhoeven’s 1987 original. It was going to take something special for it to step out of the shade.

In 2028 the multinational conglomerate OmniCorp has enjoyed worldwide successes with its robot law enforcement products. Back in the US the Dreyfuss Act, which prohibits machines from bearing firearms and being used in a law enforcement capacity, has prevented them from cashing in on their own soil. OmniCorp CEO Raymond Sellars (Michael Keaton) has a eureka moment when he spots a loophole in not just the law but public perception. He wants to put a man in a machine. Unable to find a suitable candidate, he is gifted with Alex Murphy (Joel Kinnaman) who lays in ruins after being blown up in a failed murder attempt. Murphy’s wife Clara (Abbie Cornish) signs the consent forms that allows Dr Dennett Norton (Gary Oldman) to rebuild Murphy as the future of law enforcement. Norton soon realises the complications that come with trying to control human emotion and he is conflicted with doing what is ethical and what is beneficial to his work. Meanwhile Sellars laps up the publicity and rising stock shares while Murphy decides he has unfinished business from his past life.

When it was announced that RoboCop would be rated PG-13 many groans could be heard throughout cyberspace. Considering Verhoeven’s ultra violent original, it was blasphemous to consider a lower rating for the remake. Does it hinder the film? The answer is no. Padilha ’s film may lack the graphic gore and expletive language but this isn’t detrimental to the finished product. This isn’t Verhoeven’s RoboCop, this is Padilha ’s so why should he play with another director’s rules? That’s not to say the influence of the Dutchman doesn’t linger. RoboCop still offers its biting satire of a consumerist world that is spoonfed by the media what to think. Although these themes aren’t handled as effectively by comparison, The Novak Report hosted by Pat Novak (Samuel L. Jackson) embodies the spirit of the original with the imitation of a biased news programme that exists to sway public opinion and cause outrage in a thinly veiled swipe at media such as Fox News. It also serves as the comic relief, with Jackson on form as the opinionated and rage fueled newsman. 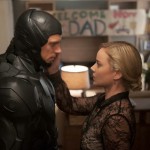 The performances, as to be expected, don’t let the film down. Sellars is a shallow man with little depth or conscience as he exists purely to succeed. Keaton breathes life into this soulless character as he represents the all too familiar villain of the real world. A man that would sell poison to babies while marketing it to their mothers, Keaton’s restrained performance of the corporate CEO is cold, calculating and recognisable of the modern era. His counterpart is Norton who looks upon Murphy, or Alex as he prefers to call him, as somewhat of a father figure. Oldman’s natural maturity as an actor shines through as presents a caring and fragile man that despite having a virtual control over his creation, appears helpless when confronted by the bigger machine of OmniCorp. The parallels to Frankenstein are evident and although he doesn’t abandon his creation, Norton’s own actions are still questionable as he attempts to strip the humanity from Murphy making him more man than machine.

Joel Kinnaman has big armour to fill and he does an admirable job. The decision to show his face for the most part allows the actor to exhibit more emotion as the man is in constant conflict with his programming. Unlike the ’87 film where Murphy slowly uncovers the truth about his existence, Kinnaman’s character is aware of who he is from the start and faces a struggle to hold onto his identity.

Despite its near two hour runtime RoboCop feels somewhat rushed. Events are skimmed over as the pace hurtles forward allowing little time for relefction. As the film reaches the third act I felt unsatisfied. It was evident that the film was reaching its conclusion however there was a severe lack of a distinguishable villain. There are plenty of bad guys but none of them took centre stage as the cinematic bastard we demanded to see punished. Murphy’s vulnerability was never really tested and I never felt that he was ever in any peril as he blasted bullets through any threat with relative ease 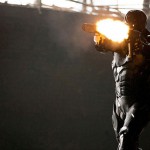 Yes, actual bullets! The PG-13 announcement struck horror into the hearts of fanboys, many of whom I imagined walked out when Murphy was told he’d be equipped with a taser. However Murphy kills people. A lot of people. We don’t see limbs shot off or red crimson mask the screen; RoboCop remains a violent film albeit with less graphic content which dispels the kiddie friendly judgement levelled at the film. The father next to me told his son to cover his eyes on a couple of occasions. Maybe he should have watched the live action series of the ‘90’s instead.

RoboCop is in no way better than the original not that this is not a good enough reason to dismiss it. Nothing that followed was better yet Padilha’s film is arguably the best thing to happen to the franchise in 27 years. A few tweaks here and there and this could have easily been a sequel or spin-off, existing in the same timeline and universe as the other cinematic releases. A little bloated in places, RoboCop is a surprisingly dark tale that’s wrapped up in a nice shiny bow and marketed to audiences as an exciting action film that’s likely to make a lot of money. Just as OmniCorp would have wanted.

One thought on “RoboCop”