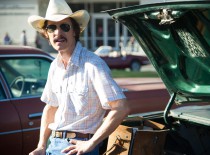 At the peak of the AIDS crisis in 1980s America, fear and myths spread faster and further than the disease itself. Ignorance led to statements that it was a purely homosexual epidemic, or that you could contract it from touching someone who had HIV/AIDS. Anyone who had the disease was stigmatised and shunned. That’s why when Ron Woodroof, serial womaniser, rodeo rider, full of Southern machismo, was diagnosed with a very advanced case of the illness, he had no idea that it could happen to “someone like him”.

Initially, Woodroof (Matthew McConaughey) is not a very likeable character. He is the quintessential redneck: living in a trailer, blowing his wages on drugs, liquor and prostitutes, and every inch the homophobe. He and his buddies don’t like “tinkerbells” like Hollywood star Rock Hudson, whose death from AIDS graces their newspapers. Men are men. They work hard, drink hard, and play hard. When he is coolly informed that he only has thirty days to live, this spurs him into action. He begins researching how he – a straight man! – could have caught the disease and demands that the Dallas Mercy hospital supply him with the latest drugs being touted as cures.

McConaughey leaves his matinée idol well and truly behind him in this role (his own previous rom-com roles not a far leap from the aforementioned Hudson). Not only is his drastic weight loss noticeable, but a more mature performance seems to have emerged from an actor who once seriously grated on my nerves. He struggles with his diagnosis – and the subsequent ostracisation he suffers as a result – struggles with his own prejudices towards the gay community and struggles against the might of the FDA to receive proper medical and palliative care for AIDS sufferers. Despite never truly losing a sense of recklessness, (he even has sex with a fellow patient so desperate is his craving for his former lifestyle) he gains empathy and adjusts his attitude and misgivings about gay and lesbian people. His diagnosis forces him to become politicised as he battles for justice.

Arguably the stand out performance of the film belongs to the street-wise yet vulnerable Rayon (Jared Leto). Also dying of AIDS, he helps Ron reach out to the gay community and advise people on the types of pills they should be taking to minimise pain. The scene in which he confronts the father who has so clearly rejected him – he doesn’t acknowledge his son’s existence on the line up of family photos in his office – shows Leto at his fragile best. Having spent most of the film being typically sassy and outspoken, this scene sees him quiet and broken. He is a suitable gentle antidote to Woodroof’s gruffness. Although their efforts are not entirely altruistic, the help and love that they offer to a stigmatised section of society is beautiful and faith-restoring.

The film also underlines the crushing cost of medical treatment in America. Drug companies are very much portrayed as putting profits before people. As Dr. Sevard (Denis O’Hare) coldly remarks, “This is business.” The Dallas Mercy Hospital is entranced by the offer of several thousands of dollars for trialling the drug AZT, which not only destroys all the virus carrying cells but all living cells. It is not the answer to the epidemic, but it provides another dose of funding. Jennifer Garner’s character – Eve – is shown to be the sole voice of reason in the hospital. Initially standing by the drug trial, she quickly realises that her own personal ethics triumph over any of the medical kind. Her performance perhaps gets lost in amongst the likes of McConaughey and Leto but nonetheless her character is solid and full of human understanding and compassion.

The lighting in the film is highly salient. Woodruff’s trailer is tinged with yellow, acidic lighting as if to suggest the toxicity of his lifestyle. The hospital is stark in its clinical whites and steely greys, contrasted with the warmth of the “raspberry mocha” that graces the walls of Ron’s office. This is a clear emphasis on the juxtaposition of people who care and people who don’t. A visually breath-taking scene sees Woodruff in a room surrounded by hundreds of butterflies. He is still, letting them flutter around him or land on his skin. They are not afraid to touch him. Their tiny orange wings are a reminder of both the fragility and the miracle that is life. They perhaps represent every life he made more peaceful by supplying a regimen of vitamins to ease the brutal illnesses that are a by-product of the AIDS virus. Director Jean-Marc Vallée used lighting and imagery beautifully in his previous effort – the equally emotional Café Floré – wherein he also developed fascinating and provocative characters who are not necessarily likeable but, ultimately, watchable.

Usually, I meet films that claim to be based on a true story with more than a pinch of scepticism, for fear that they fall back on lazy story-telling, stock characters or histrionics. Dallas Buyers Club could not be further removed from these tropes. For something so heavily tipped for Oscars, it has an almost “indie” feel to it, and that no doubt stems from Vallée and the presence of Leto. Woodruff is neither hero nor anti-hero. Rayon is neither stereotype nor anomaly. There are layers to these characters that, at times, are gently peeled away and, at times, ripped off like a sticking plaster as the narrative unfolds. In spite of, or because of, the subject matter  the film has an utterly captivating and well-developed story. And who doesn’t love a good story? Even if there is no happy ending.