As if the subject of the film didn’t have enough weight, the premiere of Mandela: Long Walk To Freedom at the 2013 London Film Festival took on extra significance when it was reported that Nelson Mandela had passed away. It was left to Idris Elba and the producer of the film to take to the stage after the screening to inform the audience. In a way it was a fitting and unique end to what was a remarkable life.

The film spans the development of Nelson Mandela from a youngster on the threshold of becoming a man in the eyes of his tribe right through to international statesman of his later years. At first, he did not have any lofty political ambitions. His one aim was to ensure that his family was proud of him. To this end a career in law beckoned. He was trying to make a difference by defending his people in a white South African court system. After an incident where a good friend was beaten to death while in police custody he became more involved in the struggle. At the cost to his family life he pursued a peaceful agenda against apartheid as a member of the ANC. When met with violence the fight for equality took on a more physically confrontational stance. It would be much longer before Mandela was in hiding, sought by the authorities and branded a terrorist. An example was made of him and his colleagues and the second chapter of his life was about to begin in the prison at Robin island.

This is no mere hagiography. Young Mandela is not shown to be a perfect and virtuous man. He was a drinker and womaniser. A man with vices and flaws. This part of his past is addressed in a very straightforward way by the film makers. It does not gloss over these aspects of his character. It shows the man at the start of his journey. He still had a lot of maturing to be done. For those of us only familiar with the image of Mandela as an older, more considered man it comes as a surprise to see the energetic, passionate and some times aggressive portrayal on-screen. 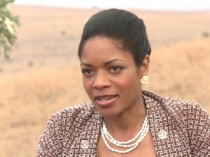 As with the history of the young Mandela, his second wife Winnie does not receive any favours in the depiction of her life. She undertakes a journey from a girl in awe of her powerful husband to a woman who, through circumstance, becomes highly politicised. The ordeal that was placed on her by government forces including intimidation, beatings and long-term incarceration inform the way that she changed. Winnie became a political force for the benefit of the ANC and eventually for her own motives. Her acceptance of violence, against the wishes of her party and husband and her use of her ‘football team’ to inflict retribution on informants is shown without comment either way. Apparently when the film was screened for Winnie Mandela she insisted that nothing was changed regarding her part of the story.

The success of film hinges on the dominant performance of Idris Elba. He goes beyond imitation of the personality (which would have been easy to do) and instead seems to channel the spirit of the man. He does not look particularly like Mandela, but he has the voice and the familiar mannerisms which draw you into his portrayal. He needs to be able to handle the transition from a man in his thirties to his nineties very well. The hair and make up are never a distraction and actually lend themselves to a performance with more depth. Naomie Harris is superb as Winnie. Her journey from a childish, naive woman to a political heavyweight is well handled and her scenes involving Winnie’s interrogation are harrowing and dramatic.

One minor criticism of the film that I feel almost reluctant to make is the fact that it tried to cram too much into its two-hour running time. The film could easily have been expanded by ninety minutes to expand some of the major story points. There are certain events noted in passing by the film that shaped and defined the struggle that fired up Mandela and the people of South Africa. Given more time for the impact of these events could have added even more to the story. In a way, it would have been good to have the film split into two parts like Steven Soderburgh’s Che, or developed into a mini series. Alas the film makers probably thought that there would not be the audience for either of these options. Splitting films in two appear to be the preserve of cash hungry franchises. As I stated, a minor gripe that can actually be taken as a positive way as I would welcome more time in the world that the film makers have created.

Overall a stirring and frank take on the fascinating life of Nelson Mandela. Recommended.