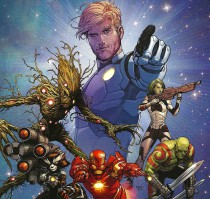 The first full trailer for the new Marvel studios property, Guardians of the Galaxy has been released online to mixed reactions. It seems that some were expecting a trailer that would delve into the film with a bit of plot explanation and some kick ass action. Instead the trailer has taken the approach that the audience may not know anything about the property in advance.

The two and a half minutes are used to introduce the viewer to the main characters in the cast with a little back story thrown in. This is conveyed in a clever way with the use of a police line up.  Only the main character Star-Lord (Chris Pratt),  is given any sort of extended introduction. The slant of the trailer is very much on the comedy aspects of the film with only glimpses of the action and a few, blink and you’ll miss them, teasers to some of the supporting characters who will feature.  With the campaign under way and a series of character featurettes being released expect the next trailer to show off the action side of the film.

Guardians of the galaxy will be released on 1st August.

One thought on “Guardians Of The Galaxy Trailer”