It is curious to see a film advertised as one thing and then turn out to be another. The trailer for Flight emphasises the initial airline accident over the human drama that plays out after it. It would seem from the outside that the film would be split about evenly between the two parts of the film. This is not true with the split being more 70:30 in favour of the drama. For a weak film, this can kill it stone dead at the box office with word of mouth spreading the bad news. Flight on the other hand stands up despite the shoddy marketing.

Whip Whittaker (Denzel Washington) is a commercial airline pilot. He is further a high functioning alcoholic. We first encounter him in a hotel room that looks as if it hosted a raucous all night party. Whip and his female companion are still a bit wasted from the night before. It takes a quick line of coke to rouse him from his stupor. Cut to him leaving the room in full captains uniform with cool sounds playing in the background. Every inch the TV commercial image of a pilot.

On the morning flight, there are two incidents. On take off the pilots are called upon to carry out a tricky procedure in order to get above some foul weather. The second, mid way through the flight, starts as a mechanical failure and ends up with the plane crash landing into a field after some spectacular and quick thinking heroics from Whip. In the aftermath of the crash, Whip is declared a hero but his problems start to come to the fore. He doesn’t feel that he requires any help. He thinks he can maintain a facade as he did before. Drink and drugs are purely recreational. One by one the people who supported him falls away. The crash investigation is asking some probing questions regarding his fitness during the flight and Whip is now the centre of the investigation. 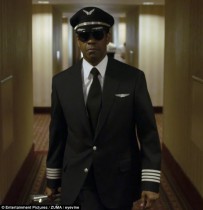 The film is held together by the performance of Denzel Washington. He is a towering screen presence and his range and skill pulls you into the story and raise your interest in what will happen next. This is despite the fact the character is deeply unlikeable and tries to alienate the audience as well as everyone around him. The second part of the film never really gets a chance when compared to the opening thirty minutes. The first part is fast, action packed and terrifying. It is a real roller coater ride. The second part of ithe film with its slower pace, human interaction and slowly descending central character, is an abrupt change in pace and feels slightly ponderous. The bulk of the second part deals with the aftermath of the crash. It follows a well worn pattern of the lead falling again and again so that the redemption seems properly earned. How many times do we need to see Whip mess up? Probably two less than we get in the course of the film.

It would have been interesting to see the film makers take a few more risks. They have a captive adience and a spectacular opening. Why not go to something a bit different rather that the story that we have seen so many times before? As said before it is only the strength of the main lead that actually holds your attention during this phase of the film.

The principal stand out from the supporting cast is John Goodman as Whip’s friend and drug dealer. He is a larger than life personality that stands out in this film. He probably wouldn’t be your first choice as a dealer as he is a bit too obvious in a crowd and not someone that Whip, who is trying to maintain a professional public persona, would be comfortable associating with. The character lends a little light relief to the proceedings and Goodman is excellent as always.

There is excellent use of music in several scenes. A prime example is the use of Gimme Shelter by The Rolling stones. Whip has just transformed himself from shambling drunk to an upstanding member of the community. As he walks along the corridor in slow motion, the track blasts out. It is a heartfelt iconic moment and it sets up the character as someone who you can identify with and actually root for. The scene nicely sets up the acton to come and immediately raises the expectation of what is going to happen next. A very nice piece of work.

Overall this is a film of two very distinct parts that is held together by the excellent performance of its main actor. Recommended.