Traditional wooden Bavarian houses line cobbled streets powdered with snow. Children play in the streets, mothers hang their washing out, fathers hurry off to work. It hardly sounds like the images of Germany gripped by the onslaught of the Second World War that have become so familiar. But it is here – in the somewhat ironically named Heaven Street – that Markus Zusak’s bestselling novel finds its onscreen home. Famously narrated from the perspective of Death, Brian Percival’s film fails to capture the wonderful nuances of the book, and provides a rather staid and muted version of what was a genuinely innovative and engrossing story.

On closer inspection of Heaven Street, the children are dirty, the mothers are tired and wringing out threadbare clothes, and the fathers dutifully avoid the Jewish grocers. But it is all surface. The set looks like a set. The children don’t look genuinely destitute. As ridiculous as this sounds, these picturesque cherubim don’t look like they know the meaning of hardship and have clearly been smeared with make-up in a way that only serves to highlight their round, rosy cheeks and dazzling blue eyes. A shiny black car draws into the street, entirely out-of-place with the faux-poverty surrounding it, and Liesel Meminger (Sophie Nélisse) is coaxed from her seat to live with her new parents, Hans (Geoffrey Rush) and Rosa Huberman (Emily Watson).

Her childhood naïveté provides the innocent perspective on war – she is full of questions and passion and a sense of injustice. She cannot understand the disappearances, the book burnings, the meetings. This is the film’s faltering point. By putting Liesel at the centre instead of Death, it loses much of the poetry of the experience of war and relies too much of clichés to tell the story. When it was initially rumoured that it would be adapted for the cinema, the issue of Death’s overwhelming narration was a major sticking point – surely it couldn’t be done? 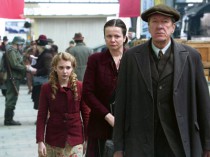 Well, it hasn’t really. The Book Thief feels disjointed on so many levels: the narration is inconsistent (I think three of four instances in total), German is spoken sporadically (a whole speech, then only the odd word in a sentence) and the cast itself never seems to gel (Rush and Mortimer are particularly miscast, with the former seeming to think that not using a hairbrush equates to a display of war-time struggle). Nélisse, too, suffers from this erratic use of German. Her lines are peppered with uneven attempts at the language and she seems to be concentrating so hard on getting the accent right that the rest of her performance is flat.

Whilst Roger Allam has an aurally pleasing voice, he doesn’t seem the obvious choice to be cast as Death. Although, his delivery of Zusak’s wonderful prose was my favourite element of the film, the lack of Death’s strong presence – as it were – is a very noticeable lack. The film is slow and plodding. This is perhaps because Percival’s previous directorial efforts at television period dramas. He has been spoiled from previously having hours of time to build up both characters and plot – a luxury cinema simply doesn’t have. All of this leads to one big problem: you are never able to feel anything for the characters, despite the extreme circumstances they find themselves in.

The war doesn’t seem to have a direct impact on the Huberman’s and Liesel initially. Certainly, they suffer from a lack of income because of Hans’ reluctance to join the Nazi Party. It isn’t until scenes of Liesel and her brownshirt-clad schoolmates merrily singing Nationalist songs are neatly juxtaposed with the shattering brutality of Kristellnacht that the reality of war strikes at Heaven Street. It is at a huge local bonfire of “degenerate literature” that Liesel earns her titular nickname.

Having only just learned to read, and keen to progress further, she cannot bear to see the heaps of intricately bound novels thrust onto the leaping, flickering flames of hatred. The scene pans across the faces of her neighbours, cursing intensely at the un-German ashy remains before them whilst cheering furiously at the local Burgermeister’s speech. Air raids soon become a regular occurrence, food is scarce and Liesel’s friend Rudy (Nico Liersch) is groomed for a youth army camp because of his physical fitness. The Huberman’s find themselves hiding a Jewish man, Max (Ben Schnetzer), in their basement – at great personal risk. The bitter winter leaves him near death and Liesel seizes this opportunity to read him back to life, as it were, by spending their freezing, fearful nights telling him of exotic, happy, magical words where no one is different or under threat. Tales of heroism, courage and happily ever afters provide a welcome escapism to the bombings going on around them.

The film begins to pick up towards the last fifteen minutes or so when events become muted onscreen and Death’s narration takes over. Allam’s reading of gently collecting souls, what a soul feels like, how people either lose their grip on life or fight to give it up is a stunning accompaniment to the events onscreen. All the unusual and striking uses of language in Zusak’s novel are given a chance to breathe life into an otherwise sedate film. A book that seemed so tangible and absorbing – not unlike the books Liesel reads to Max – has translated into an insipid and saccharine take on World War Two that never really scratches beyond the surface. The characters never really get a chance to form properly and the beautiful lyricism of Death’s narration is crammed into the last few moments of the film. This really was a wasted opportunity to adapt a truly enjoyable novel.