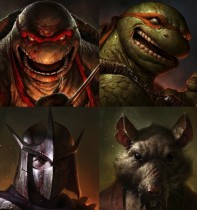 Hot on the heels of the first trailer for the new TMNT movie comes some casting updates. Johnny Knoxville and Tony Shalhoub have been added s the voices of two of the major characters. Knoxville will provide the voice of Leonardo and Shalhoub will be on vocal duties for the character of Splinter.

Principal photography for the movie has been completed with actors Pete Plozek and Danny Woodburn fulfilling the physical roles of the characters. According to the film studio it was always going to be an option to change the characters voice. It has not been revealed if the original actors were aware of this during the filming schedule.

Teenage Mutant Ninja Turtles will be released on the 8th of August.