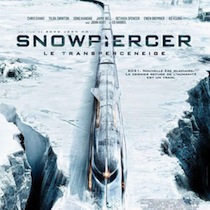 Every so often a film is made that not only just exceeds your expectations, but actually takes those expectations and launches them into orbit. One such film was Snowpiercer by Joon-ho Bong, quite literally a train ride full of twists, turns, a splash of madness and a dark insight into human society.

The year is 2031, it has been seventeen years since an experiment to stop global warming resulted in the atmosphere being frozen and all life on Earth seizing, except for the few hundred or so on board the Snowpiercer, a high speed supertrain traversing the globe and resistant to the freezing effects outside. In a macabre nod towards the dark side of human nature, a class system is soon established with the economy passengers oppressed at the back of the train whilst the first class passengers live in luxury at the front.

Chris Evans plays Curtis, a far cry from the squeaky clean Captain America, and does a sublime job of it. He has lived in the poor quarter since he boarded the train just before the disaster and with Gilliam, (John Hurt), has been plotting to wrench control of the train and bring equality to all. When the chance for revolt finally comes, Curtis and his rag tag band of followers journey through each of the train carriages in a journey that makes Alice’s expedition through Wonderland look like an everyday stroll through the park.

Here the cinematography comes into its own, as at the start, everything is dirty, grey and squalid. The people are downtrodden with hopeless looks in their eyes, pretty much everything you’d expect from a dystopian apocalyptic future type of movie. However, fast-forward a few carriages and, similar to the world of Oz, everything becomes more colourful, brighter and with more than a touch of madness in the denizens eyes.  This is encapsulated beautifully in the classroom scene as our senses are rocked at the contrast of young children singing praises to the owner of the train and the mindless violence that follows it.

Tilda Swinton is unrecognizable as Mason, the warder between carriages. She stems from the upper classes and firmly believes everyone on the train has their place and when the oppressed complain, they need to be punished, and brutally so. She portrays her madness as a total lack of humanity towards her fellow people. When one of the passengers throws a shoe at one of the elite classes, he is punished by having his arm frozen, and then smashed by a massive sledgehammer in a scene that is as horrific as it is enthralling. 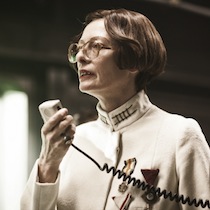 Considering the gravity of the situation and the dark themes, Joon-ho Bong manages to inject some unexpected pieces of humour into his film which will have you laughing as much in surprise as to the actual joke itself, just because it’s something you don’t often get in the post-apocalyptic genre.

All in all, the film is not without its flaws and does leave the viewer with some unanswered questions at the end. However, it is such a breath of fresh air, not only in this genre but in the world of film itself. It is based on the French graphic novel Le Transperceneige, and you can definitely see the comic book inspiration. It is highly original, horrific, and bizarre. One constant throughout is the superb storytelling which compliments the masterful character portrayals by the actors. I can’t recommend this film enough.