It is a challenge for a horror film to find its audience in todays crowded market place without it having a number of production issues delaying the film and ultimately generating negative press coverage. The Apparition sadly encountered problems before the movie going public got a chance to see any of it. The film was a co-production between Warner Bros. and Dark Castle Entertainment. Unfortunately the relationship between the two companies broke down resulting in the film being shelved for over two years. When it did finally release Warners ensured that it received the smallest possible cinema opening resulting in the film disappearing without a trace. The only hope for the movie was the home market where it had a chance of winning a reputation. Having seen this film I kind of wish they hadn’t bothered.

The film is a fairly standard horror plot. In nineteen seventy-two a séance was carried out by a group of scientists in order to raise the spirit of a dead colleague in what became known as The Charles experiment. Twenty five years later, a group of  students try to recreate the event under more scientific conditions. Of course, something happens. Several years later Ben (Sebastian Stan), one of the students in question, is setting up house with his girlfriend. At first, all is calm but soon enough strange and odd things start to happen. At the same time Ben receives a series of messages from his old colleagues. They have carried out the experiment again resulting in ‘containment being breached’. Something, potentially malevolent, is out there.

The film has fairly modest goals, but it fails to meet even those. The main problem is the shocking lack of originality. This leads to a whole host of other problems in its wake. There are not any great scares and a distinct lack of tension throughout the proceedings. Even plot twist and turn are signposted well in advance which frustrates the overall viewing experience. 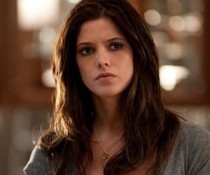 The acting by the principal leads is fine given the material they have to work with. A lacklustre script and poor character development does no favours to them. The principal characters are fairly standard horror characters that will be familiar to film goers with only a passing interest in the genre. He is a troubled man, in denial over the events of his past. These secrets will come out and that is exactly what he is afraid of. You are supposed to divine this from his morose expression, but it comes across as if he is a bit annoyed at his dog making a mess on the floor. The lead female character (Ashley Greene) is similarly dull, alternating between exaggerated terror and deliberately forgetful of what is going on around her. The lack of character development is a genuine problem as it highlights the issues in other areas of the film.

The majority of the scenes which are intended to be tense and dramatic fall flat. One of the first appearances of the spirit with the couple is really stupid. It manifests its power and presence by moving a chest of drawers by half a metre. Soon after the way that evil emanated from the House is represented by a growth that looks like dirty puff candy. These examples of the problems unfortunately are not isolated but indicative of the tone of the rest of the film.

Overall a disappointing and actually quite boring generic horror movie. Not recommended.