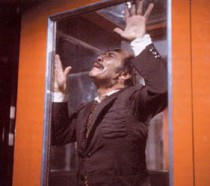 There are certain films that make an enormous impression on you. Most film makers, actors and technicians can remember the point where a single film marked the change in them as they realised that they could do what was being presented on screen. For the rest of us, there are similar moments when a film strikes a chord and becomes a firm favourite to go back to again and again. For me, one of these moments was a Spanish language short made in nineteen seventy two. Pretentious? Moi?

The film in question is La Cabina (English title The Telephone Box). In an ordinary square in the middle of a house estate four workers unload a telephone box from their truck and proceed to set it up. They work quickly and efficiently and soon leave the box ready for use. Soon enough a man walking past notes the recent landmark and steps inside, closes the door and tries to make a call. When this fails, he finds that he cannot leave the box. The door is locked. As he starts to exhibit concern passers by start to take notice of his plight. A crowd forms. Treating the situation as a source of amusement at first the crowd thinks the man is playing a practical joke. It soon becomes clear that this is not true. Several people try to help to no avail. It seems the man is imprisoned.

I first saw this film on Channel Four in the UK in nineteen eighty three. At the time, the channel found myself in its infancy. Its remit was to present an alternative to the offerings of the mainstream at the time. Part of this was the airing of left field and art house films including the infamous red triangle films. La Cabina was part of these offerings. 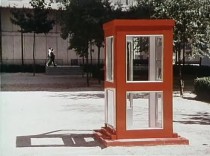 The film, in a relatively short thirty five minute run time, is a very clever piece of cinema. It takes a simple premise and takes it well beyond the logical conclusion. In the best tradition of short films, it provides no back story and just lets’s the slightly surreal story take you along. It is a film of two very distinct parts. The opening half is light and comedic as the locals enjoy the absurd spectacle of a man stuck in a perspex box. There is much made of the crowd’s joy and the entertainment value in people setting themselves up at advantageous locations in order to relax while the spectacle unfolds. The second half is decidedly darker for reasons that I will not divulge. You need to watch it for yourself rather than me spoiling it for you.

The central performance by Jose Luis Lopez Vazquez is superb. He convincing portrays a man slowly falling apart as all efforts to free him come to nothing. His performance is fresh and nuanced without resorting to some of the more cliched and familiar acting tropes. He emanates a real sense of despair and bewilderment at his situation. Bear in mind that this is an almost wordless performance and it is down to his range of expressions to convey his emotions. The tight direction from Antonio Mercero uses the phone box setting to create a genuine atmosphere of claustrophobia. There are plenty of close up shots of the man in the box switching to wide shots of the crowd emphasising the peril and frustration building up.

This is a film that you should watch. The film can be seen below. Highly recommended.