Re-examining the early films of a top director gives you an insight into the process and the development path he or she adopts in order to deliver the finished product. From 1998, Following is the feature debut from Christopher Nolan, one of the only directors working today who is able to make art house blockbusters. This modest debut film introduces us to his style and the story telling techniques he would later use to great effect.

The film starts deceptively simple. Using a monologue, we are introduced to an aspiring writer (Jeremy Theobald) who is using his vocation as an excuse to shadow complete strangers. He chooses people on the street if some reason they pique his curiosity. He operates under a code of conduct about following women into dark places and not interacting with his targets. He soon breaks the second of these as he is extremely curious about a well dressed man carrying a bag. In an effort to learn more about the man he takes a risk in sitting near him in a cafe. He is spotted and the man, Cobb (Alex Haw), confronts him. It transpires that Cobb is a burglar and the bag he carries is the proceeds from his latest job. The writer is intrigued. He persuades Cobb to take him on a job. On the job, they run into a problem when the owner returns while they are foraging through the flat. Cobb, ever the smooth operator, is in a position to bluff his way out of a potentially awkward situation. The writer is hooked. Soon he working alongside Cobb, learning his methods and enjoying the moment. Soon he breaking his own ground rules again as he gets involved with a woman whose house he burgled. She is currently in a bit of bother with a former lover and enlists the writer to help. 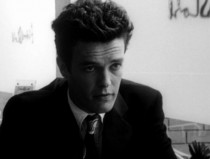 This is surprisingly complex film given its synopsis and the relatively short run time of seventy two minutes. The film uses a non linear plot structure to keep the audience guessing and intrigued. Nolan would use this again in The Prestige and Memento. It is a clever device as it adds a level of depth into the film. It can turn a narrative that is quite straightforward and familiar, transforming it into a puzzle box of a film. The writer is seen in several different guises in the space of a few brief minutes. He may start unshaven and scruffy only to change to a clean shaven executive then appear with bruising on his face. It is a play on the title of the film. It is asking the audience ‘Are you following?

The film has obviously been made on a minuscule budget and the most has been made in the settings and cinematography to enhance the finished product. The film is shot in and around some of the seedier and run down areas of Lodon. There is not anything glamorous and attractive about the locale. It mirrors the seedy side of what the writer is doing. Streets are bustling and overcrowded. Flats are seedy looking and a bit tired. His enviroment informs his behaviour and attitude. He thinks nothing of stealing from people whether it is their possessions or their sense of security. Cobb does not only steal things. He also messes with the home owners heads. He moves mementos and hides things like single earings where they will be not located for a long time. This is the behaviour of a sociopath and is something that the writer has no objection emulating.

The look of the film enhances the grimness of the locations. Shot in black and black and white and starkly lit, the film serves to creating the mood before a single line of dialogue has been delivered. Add the fact that there is little in the way of a soundtrack the effect is very powerful. It would have been more straightforward to follow standard film making conventions, but Nolan had a very clear idea of how he wanted his debut to look and feel. For a first feature it is ambitious and entertaining which all you can seek from a movie.

Overall a surprisingly daring and unique debut feature that put Christopher Nolan on the map as a director to watch. Recommended.