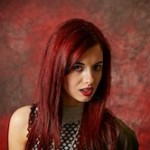 It’s a sign of the times that not only is some of the most inventive and exciting television to be found through streaming websites like Netflix, but that it is now made exclusively to be shown online. There are numerous benefits to such arrangements most notably in terms of finance, but for emerging film-makers, the opportunity to work outside of the normal constraints provides a chance to fully realise a vision and take some chances.

Cops and Monsters is a planned web-series from Silly Wee films, a film company based in Glasgow who are aiming to raise the required funds to expand upon a minisode The Weapon.
Written and directed by Fraser Coull, the action is set in an alternative future where Scotland has gained independence. The change in the political climate has led to vampires, werewolves and zombies declaring their desire to live alongside the human race. A special unit within the police to protect both mankind and creatures has been set up, headed up by Eve Mitchell (), drafted in from Texas to lead the Paranormal Investigation Team Scotland, carrying the unfortunate acronym PITS. In their daily dealings with the numerous supernatural beings, they encounter a vampire with links to a larger problem within the newly adopted community.

For an independently made local venture, there are the obvious problems in the levels of locations and acting. I’ll leave the questionable accents to the side (Why is the main character from Texas?). However, the budget extends to some quite impressive special effects, and they certainly cover a lot in the space of 8 minutes in establishing the world that the PITS team works within. For a taster for a six part series, this bodes well in holding the interest of an anticipated audience. The main problem is that it already feels very dated. If there is a tagline that the whole series could be sold on, it would be ‘True Blood meets Taggart’.

While the Zombie fad seems to show no sign of leaving, the Twilight series effectively killed off the Vampire trend of recent years. However, True Blood had edged its bets by featuring the same range of supernatural tropes that Cops and Monsters is aiming to take in, but added its own special ingredient, sex. Cops and Monsters finds itself entering the fray at a strange time. There is still an audience for this fare, but it is one that has extremely raised expectations to see something that shocks and entertains in equal messures. You can’t get by being a lukewarm melding of shows that most people have grown tired of.

If Cops and Monsters wants to succeed, it needs to aim a little higher in terms of originality. There is little in the initial episode that people haven’t seen. The tone of the series isn’t yet apparent, and when you have the 100% control over what goes into the show, the writers and producers need to mould something with its own identity.
The series has set out to build a reputation by touring film festivals and conventions, and by the name recognition of stars such as Sarah Louise Madison who has previously featured in Doctor Who. This will be fundamental to the success of the show.
Ultimately, there is room for improvement. If the show is able to expand into a series by achieving the funds it requires, then the success relies on a show of originality and imagination. As a home-grown effort, there is enough to keep an interest and I hope that the undoubted hard work of the cast and crew pays off.

Watch the video below for how you can get involved.

One thought on “Cops and Monsters”