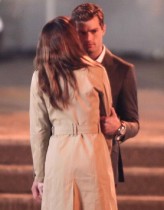 After the fifteen second teaser released earlier this week, we get a first real look at the movie of the publishing phenomenon that is Fifty Shades Of Grey. With a new version of Beyoncé’s Crazy In Love we get a fairly tame look at first interactions of Christian Grey (Jamie Dornan) and Anastasia Steele (Dakota Johnson). Although not giving too much away it will not disappoint the fans of the source material.

Now that the controversy regarding Charlie Hunnam prematurely withdrawing from the project is in the past the positive publicity campaign can begin in earnest. One interesting aspect of the film is director Sam Taylor-Johnson. A successful visual artist , she moved into cinema with the critically acclaimed Jon Lennon biography, Nowhere Boy.

In a very clever marketing move Fifty Shades of Grey will be released on Valentines day 2015.