You can almost picture the scene. Vin Diesel, ambassador for tough bald guys, is in the offices of his agent. At this point he is a successful action star with several high grossing movies to his name. He is hot. The word placed on his lap is diversity. Expand the Diesel brand, grab a new demographic. Basically go for the family market. From this (fictional) meeting comes the beginnings of the action comedy vehicle that is The Pacifier.

There is a dire situation. A high-ranking government scientist has been killed. He was in charge of a super secret spy program code named Ghost. He has left behind a wife and five kids. A representative of the military and the wife are dispatched to a Swiss bank to try to find the missing program in their vaults. Arrangements are made to protect the children in their mother’s absence. Enter Navy SEAL Shane Wolfe (Vin Diesel), a highly experienced operative who is tasked with ensure the safety of the kids while allowing them to have as normal la life as possible. As expected, things do not go too smoothly at first. The children are missing their parents and are acting out against the figure of authority closest to them. Shane has to use skills he didn’t know he possessed in order to guide and protect his young charges.

Given the premise and the potential for disaster this is actually a really enjoyable film. The story is a very familiar one but the star turn by Mr Diesel keeps it fresh. He is surprisingly good in a comedic role. His comic timing is excellent and his acting style lends itself to the awkwardness of the situation his character finds himself in. At first he is a straight-backed military man, which Diesel is very good at. As the film progresses
his character changes as the demands of each problem require a different set of skills. Diesel is able to handle these changes well and his performance is consistent and fun. 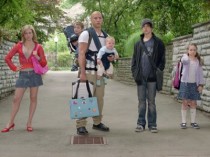 In terms of supporting cast the children are the stars. Each one is given sufficient screen time to establish their own character traits and issues. As with Vin Diesel they all have good comic timing which definitely helps keep things going. Some people look on comedy as an easy option in acting. You just have to play the fool and it will work. My own opinion is that it is a harder skill to perfect than dramatic acting. The actor has to be able to convey not only skill but also amuse and entertain at the same time.

Since this is a family comedy, the action scenes are appropriately balanced for the intended audience. Part of the plot involves two masked intruders trying to find Ghost. They are, of course, stealth ninjas. During the battle with Shane it becomes clear that although there
is a lot of punching and kicking there are no real consequences. Wooden poles smashed over the head produce no blood or real injury and allow all concerned to live to fight another day. In one sense it is like cartoon violence in execution and tone. It fits perfectly for the age range of the audience and does not spoil the film in any way.

It is unfortunate that this did not lead to Vin Diesel stretching his range even further. The film, although a success, was not deemed to be the expected cash grab that was expected. Vin has since gone back to more standard action movies and is arguably a bigger star now than he was prior to The Pacifier.