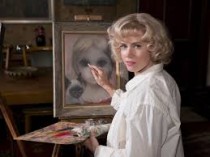 The first trailer for Big Eyes, the forthcoming film from celebrated director Tim Burton has been released. It is his first movie since the 2012 double hitter of Frankenweenie and Dark Shadows. The film is the story of the artist Margaret Keane the artist best known for her paintings of females and children which features over sized doe eyes of the featured subjects.

Tim Burton has been a fan of the work of Margaret Keane since the nineteen nineties and even commissioned her to produce a portrait of his then girl friend Lisa Marie. Keane first came to prominence in the nineteen sixties when her artwork was placed on the market under the name of her husband Walter. When he went on to assume credit for her work the couple went to court to settle the matter leading to the validation of her status and the recognition she deserved.

The film stars Amy Adams as Margaret Keane with support coming in the form of Danny Huston, Jason Schwartzman and Christoph Waltz as Walter Keane. It will be interesting to see how Tim Burton tackles what looks like a reasonably straightforward biography.

Big Eyes will be released on the 26th of December.