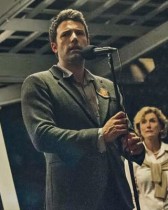 It can be very tricky adapting a successful novel for the screen. The main problem is that the readers build a picture of the principal protagonists in their own imagination and when they finally get to see the interpretation of a film maker it can be something of a disappointment despite the caliber of the talent involved. So what will the many fans think of David Fincher’s adaptation of the international best seller, Gone Girl.

Nick Dunne (Ben Affleck) is having a tough day. It is his fifth wedding anniversary and he is spending it at the bar he owns with his sister, Margo (Carrie Coon). He is already in a foul mood as he and Margo bitch about his woes. Nick gets a call that will alter his life. He arrives home to find the front door open, the living room in a mess and his wife Amy (Rosamund Pike) missing. The police are soon on the scene and it becomes apparent that Amy was the focus of foul play. Missing, possibly dead. As the authorities set out to investigate, the weight of suspicion falls on Nick. He has unexplained debts. He took out a large insurance policy on his wife and he appears to be avoiding providing answers to some straightforward questions. As this unfolds, we get Amy’s version of their past relationship which starts to inform Nick’s current behaviour. With the media following the drama at every turn, Nick and Amy’s lives are under the spotlight.

This is kind of a difficult film to go into any great depth about without spoiling it. Needless to say it is exceptional. This is a film of many parts. It starts off as a conventional murder mystery but soon takes some very sinister turns. The examination of how the media essentially forms and then changes the popular opinion based on shreds of information is to the fore throughout the film. On several occasions, Nick is regarded as a good guy or an evil monster depending on what the latest information is out there. It is an effective comment on the role the media plays in every day life.

Ben Affleck, no stranger to press intrusion, totally inhabits the role of Nick. At first, the audience is drawn to him but as the story progresses you are more unsure of him as certain facts come to light. Affleck has a quality in his performance that leaves you unsure of him. His wholesome charm is evident but switches to creepy in a scene where he is pictured smiling beside a picture of the missing Amy. It is a performance that gives little away and only hints at what is taking place beneath the surface.

Rosamund Pike is even better in the role of Amy. She is a fantastic actress who fully deserves the praise she is getting for her performance. In keeping with the Affleck performance she gives little away at first and when she has the opportunity to expand her role she is compelling as the counterpoint to the persona of Amazing Amy, the character from her parents best selling books.

The film is long, with a two and a half hour running time. It doesn’t feel like it as the audience is engaged in the story from the start and in the hands of director David Fincher the tension is high for the whole of the film. So that it does not become unbearably tense, there are a couple of very black humour designed to temporarily release tension. At the screening I was in, the audience burst out laughing at the end more in relief than anything else.

One of the reasons for this tension is the manner in which the story makes the audience look at themselves. What it shows is that everyone lies to some extent, be it to your loved ones or on social media. We all do it to some degree, even by editing out the undesirable parts of ourselves that we do not intend to make public. The film goes behind that facade of the main characters and you get a glimpse of what they are truly like.

Overall, this is another triumphant piece of cinema from David Fincher and his cast. It is edgy and thoroughly engaging from start to finish. Highly recommended.