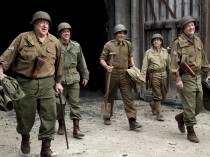 The popularity of film genres seems to go in cycles. The usual pattern starts with a surprisingly massive hit movie which garners praise and award recognition. This leads to a glut of movies within the same genre. Usually these are substandard efforts and an obvious cash grab on the part of the studios. War films have been out of favour for some time now mainly due to the box office returns for a number of Gulf war movies. So it takes a real effort to get a project off of the ground. A twist on a familiar theme and the kudos that a major star like George Clooney brings was what was required for The Monuments Men to make it to the big screen.

It is 1944. The Allies have landed on the beaches of Normandy and the war is now beginning to turn in their favour. For a number of years, the Nazis have been raiding museums, galleries and private collections to stock the proposed Führer museum to be constructed in Hitler’s home town in Austria. With the Allies advance fresh orders have been issued to the retreating German troops. What you cannot move, destroy. Frank Stokes (George Clooney), an art professor, manages to convince the American authorities that art is worth preserving in the war zone. He gets his wish on the condition that he assembles and leads a team into the front line to carry out the job. He recruits academics from all walks of life who are closer to pensioners than soldiers including Walter Garfield (John Goodman), Richard Campbell (Bill Murray), Donald Jeffries (Hugh Bonneville), Jean Claude Clermont (Jean DuJardin) and James Granger (Matt Damon).

On the face of it initially appears to be a caper movie in the style of the Oceans trilogy. It does follow this pattern initially as Sokes pieces together his team and the mood of the first thirty minutes of the film. The mood dramatically changes as they arrive at the war zone. It is here that the comparisons to a caper movie end. There is a slightly unreal moment as they reach the shoreline in Normandy. The beach is quiet and organised as the D-Day landing was a month or so before. It feels bizarre for them to arrive in that way and not be under enemy fire. The reality of the situation they find themselves in is plain to see on the screen. France and, in later scenes, Italy is literally in ruins. The way the story unfolds leads to the team splitting up and begins to track down art on several different fronts. This gives a variety to the action as they chase different goals. Matt Damon’s character is sent to the newly liberated city of Paris where he has to persuade Clair Simone (Cate Blanchett) to help him. The way he wins her round after her initial suspicion of his motives is handled lightly and the almost expected romantic interlude never materialises.

It’s the personalities on the screen that make this movie stand out from nay others like it. As a director George Clooney has always been generous with the screen time allocated to the other members of the cast. This film is very similar. The rest of the main cast are all very capable actors and have the ability to develop their characters given the time on screen to develop them. It is a credit to the ensemble cast that no one tries to out perform any other actor.

The story may seem a bit far fetched but it was in fact based on a true story and, according to the publicity surrounding the film, the majority of what you see on the screen is accurate. The action moves along at a pace and is dramatic with high stakes at points. There is just a little light relief along the way to change the tone. These changes are well judged as too many swings from dramatic to comedic would have the effect of lessening the impact of the core story.

One of the elements that elevate the film is the rather excellent score from Alexander Desplat who was last heard in the Wes Anderson triumph, The Grand Budapest Hotel. It is a collection of military themed pieces which remind you of some of the very famous film soundtracks that accompanied the war films of the 1950s and 1960s. It is exactly in step with the visuals and lends an extra layer of drama at the appropriate moments.

Overall, an old fashioned war film with a modern twist that is as good as you would hope it to be. Recommended.

2 thoughts on “The Monuments Men”