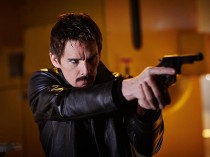 Predestination is the third film from the writer/director twins Michael and Peter Spierig. Here they have adapted a 1950’s sci-fi short by the author Robert Heinlein called All You Zombies that looked to a future (1980s) where time travel had become possible and the paradoxes that would be created if we used it.
Like their previous film Daybreakers, the twins have called upon Ethan Hawke to star in what is basically a two man show. Hawke plays a temporal agent on his final mission, an attempt to stop a mysterious 1970s bomber called ‘The Fizzler’ who killed thousands in a bomb attack on central New York. After the failed attempt that opens the movie we jump back in time to a New York bar where Hawke is serving the drinks and starts up a conversation with John played by Sarah Snook.

John bets the bartender a bottle of whisky that his story will be the most amazing one he has ever heard and what follows is roughly an hour or dialogue detailing how John was born Jane and went through a series of events, including the story of the man who ruined Jane’s life, and eventually ending up in that bar that night. Well it turns out that Hawke’s character is fully aware of all of this and promises John revenge on that man in exchange for him agreeing to become a time agent.

And then things get weird. Very weird! 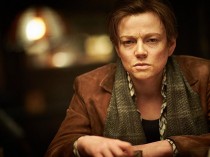 Ethan Hawke is really solid as the Bartender and when we see him at a later stage in his future he plays the ‘man losing his grip on reality’ very well too. I have always liked him since his earlier roles in films like Gattaca and Training Day and this type of role suits him well. It is Snook however who steals this film. I haven’t come across her before in any of her many Australian TV roles. Nor in her big break starring opposite True Blood’s Ryan Kwanten in the 2012 comedy Not Suitable for Children, for which she won the critics choice award ‘down under’. Whilst her ‘man-makeover’ isn’t wholly believable, it is OK as her male persona is struggling to get past its female origins. Both as John and Jane her pathos and determination come across beautifully as she tries to make her way in the world.

It is easy to sit here and say that I figured out all the twists and turns of this complex plot before they happened. My brain was in over-drive and I must have come up with 50 crazy theories, and guess what – one was right and 49 were wrong. Either way I enjoyed it immensely.
Ultimately this story is a perfect paradox and the ending answers few questions and leaves you hanging. It is a massive crime from the studios that this film is struggling to get a cinematic release in the UK. I cannot recommend it more highly, so if you can find a showing at the local art house or university film club then grab your popcorn and strap yourself in for a brain-frying!

Writer at Moviescramble. Master of the Yorkshire Martial Art of Ecky Thump. When he is not being a Dad or office slave he loves nothing more than watching dodgy super-hero movies or fake historical dramas with excessive nudity.